Download all the mods here.  Most of these mods are installed via Texmod/.tpf (instructions). 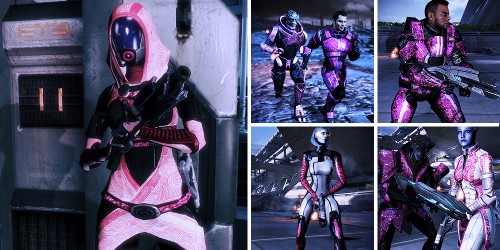 It is my firm belief that Kaidan is one of the most under-appreciated team mates in the whole ME franchise, so here is some love for the poor guy :) 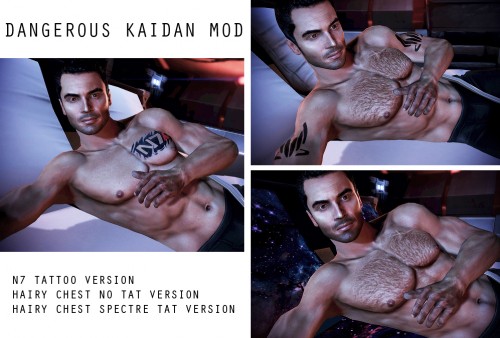 Kaidan has seen some shit.  He’s a Spectre now and a BAMF.  And he wants you to know it.  Added eyebrow/eye scar, chest scar, darker 5 o’clock shadow – optional chest hair, tattoos.

Have you ever just wanted a super fabulous fucking party?  This texmod replaces everyone’s outfits in the Citadel Party with something crazy and pink.  Lots of fun, ridiculous details you’ll just have to find out about when you use this mod :) 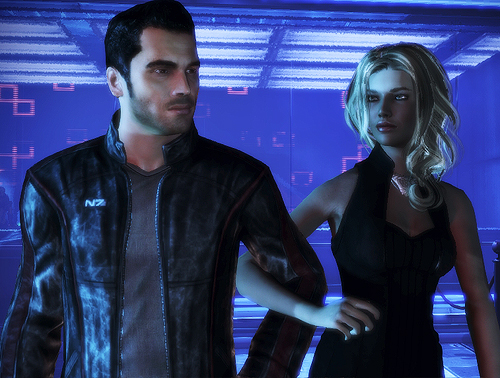 Replace Kaidan’s formal wear in the Citadel DLC with Shepard’s leather jacket, because Kaidan is a rock star.  Requires ME3 Explorer and Texmod.

Welcome to the gun show.  Requires ME3 Explorer and Texmod. 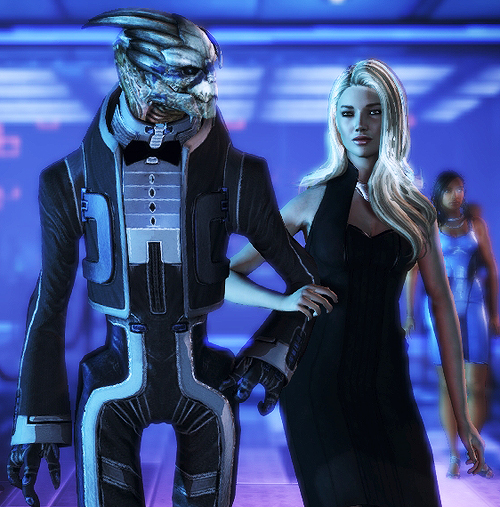 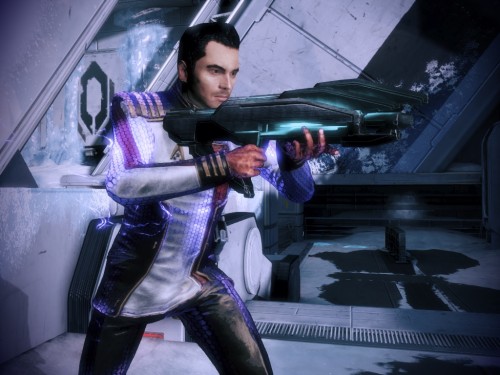 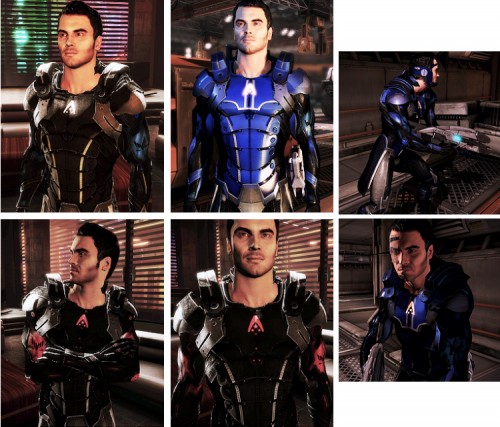 See what I did there?  Get it?  Anyway, there are two versions of this mod – the AjaxCitadel version allows you to replace Kaidan’s Ajax armor (to wear this armor in battle instead) and/or his formal outfit for the Citadel DLC.  The IntroUdina version allows you to replace Kaidan’s armor on Mars with the new armor and/or his armor during the attack on the Citadel (Udina scene).  Comes in Shiny Blue, Matte Blue, Black with Blue Lights, and Black with Red Lights.  Requires ME3 Explorer and Texmod. 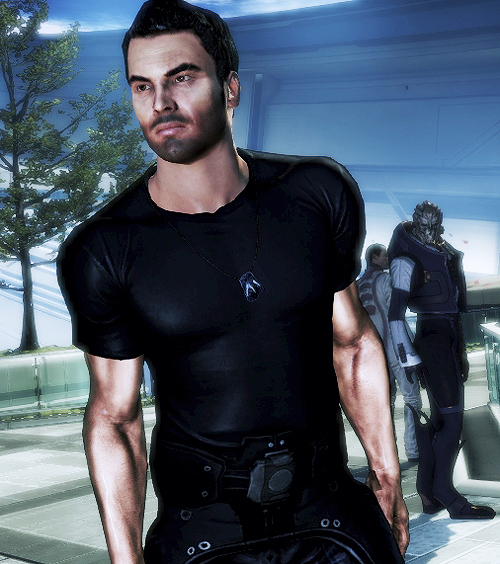 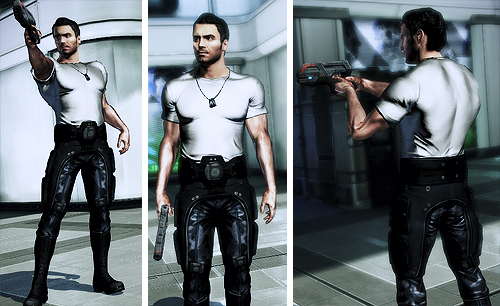 Holy smokes, Kaidan just got a sexiness upgrade.  Comes in black or white t-shirt version.  You can replace his outfit in the Udina shootout scene or his date outfit during the Citadel DLC (where he comes over and cooks steak).  There is an issue where he will look wet in some lighting during the Udina scene – like he was just in a wet t-shirt contest.  I can’t figure out how to fix the spec so you’ll just have to embrace it :)  Requires ME3 Explorer and Texmod.  THANKS TO ELE FOR HER PERMISSION TO USE HER ORIGINAL SHEPARD MOD – GET THIS OUTFIT FOR YOUR MSHEP HERE! 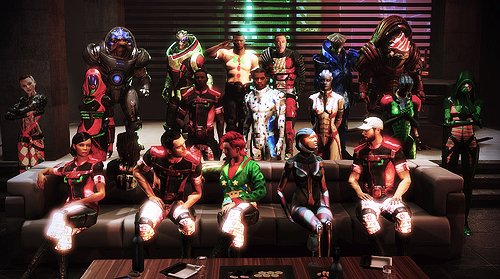 This replaces about 40 different textures during the Citadel Party to turn it into the ugly Christmas sweater party of your dreams (right in time for the holidays!).  Also has the optional hoodie replacer for Shepard that gives him/her the UGLIEST SWEATER OF THEM ALL.  Every character gets their own outfit and there are even some surprises … install it and find out :)  Requires Texmod.

It’s not enough to have beefy Kaidan for the Udina scene … you just have to have him for your Citadel DLC date, too :)  Nothing says manly like cooking steak and drinking beer after all.  This version has black or white t-shirt and best of all, he doesn’t look like he’s in a wet t-shirt contest any more (the spec is fixed). :)

This mod replaces Kaidan’s Citadel DLC outfit and/or Kaidan’s Normandy uniform with Shepard’s Hoody (includes Normandy romance scene in Shep’s cabin).  Note: The Normandy mod will replace EVERYONE on the Normandy crew’s outfits with the hoody (it’s the only way!).  It will also only be active while crew members and Kaidan are on the Normandy – if they are in scenes on the Citadel, their normal outfits will override the mod.  Comes in blue and black – white version pending. 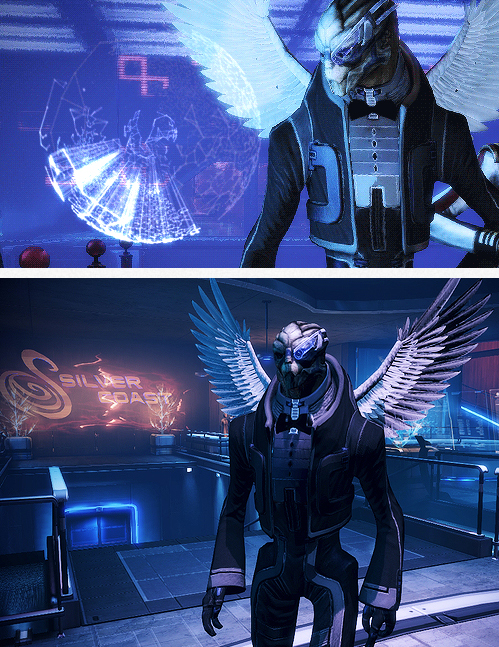 Putting the “angel” in Archangel with this mod that gives Garrus some fucking enormous wings during the Citadel casino scene (replaces his formal outfit).  Wings come from Favored Soul’s Skyrim wings mod :) 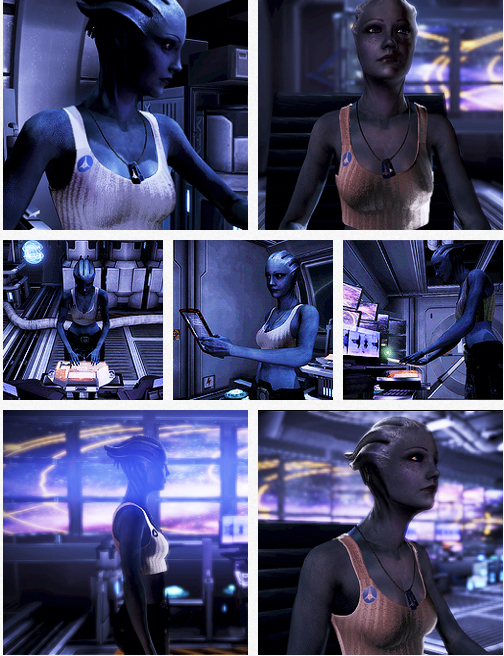 OMG how fucking adorable is Liara?  Replaces her casual appearance on the Normandy with a casual crop top and pants from Kitsumichi (AKA KurauAmami on Deviantart)! 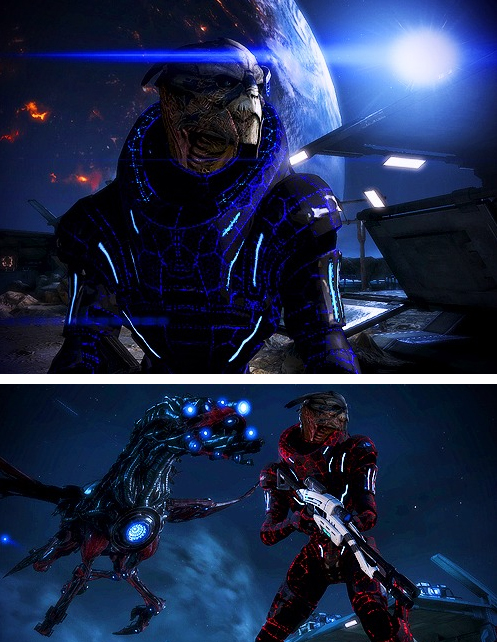 Give Garrus some glow with some built-in tech armor.  Comes in glowing red, blue, or combination (red and blue, like 3D glasses – not pictured).  Also replaces Garrus’ armor mesh with Victus’ mesh.