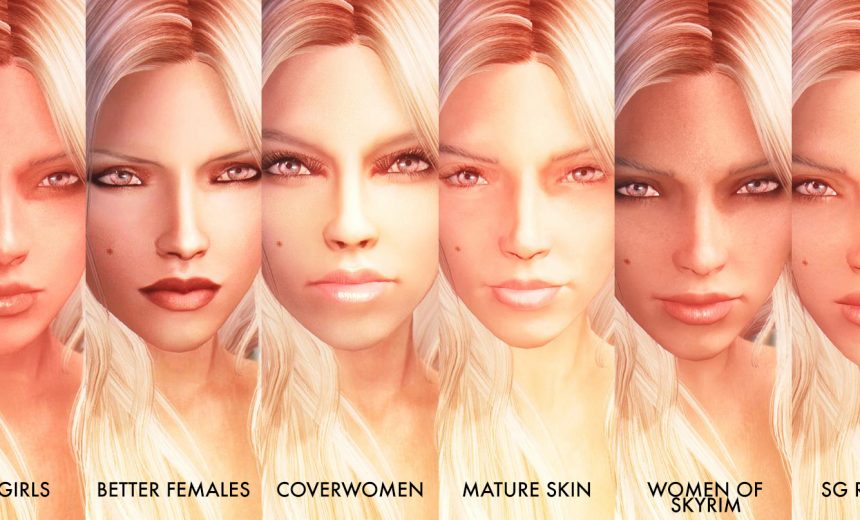 I just upgraded to a brand new computer, so I wanted to revamp my Skyrim game with the best mods my new rig can handle. Naturally, after vanilla-ing my game and installing some choice ENB mods, I wanted to overhaul my characters to look as realistic as possible. I’ve been using the same face texture mods for over a year and I decided to explore all the other mods out there – here is a comparison (from best to worst) of all the face texture mods I tried: 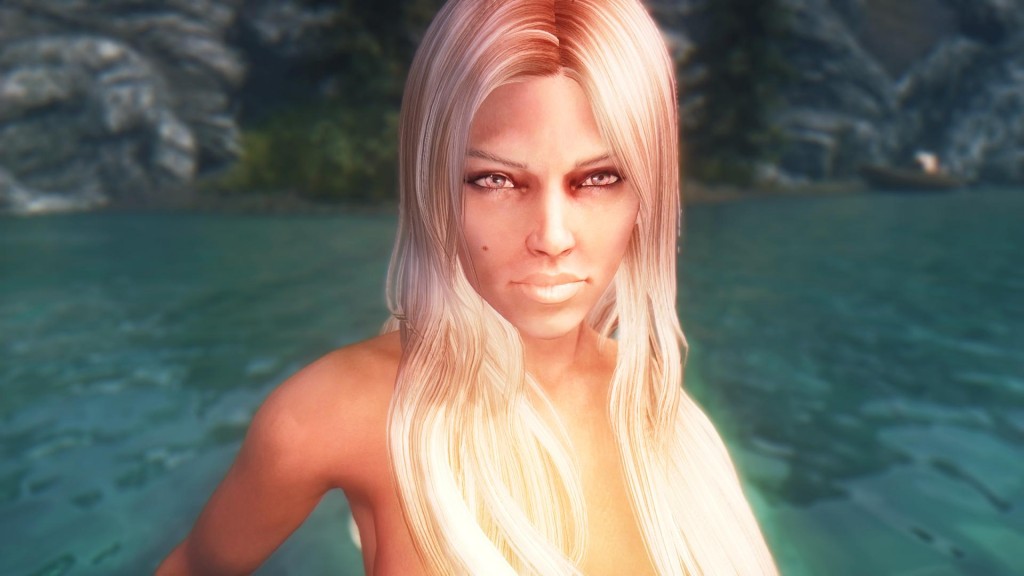 As you can see, the vanilla Skyrim female face texture is a little (lot) haggard. There are some weird coloring issues, like the dark rings around the eyes and the white ring around the mouth. The lips are just one pale mess with no amount of dimension. All in all, not very cute.

This is my personal favorite – I like that the eye area is a little brighter, giving my character a fresh and awake look. I also like the lip texture, which has just the right amount of gloss. My only complaint is that the skin is a little too flawless, but that can be easily “corrected” with some dirt/scar overlays. 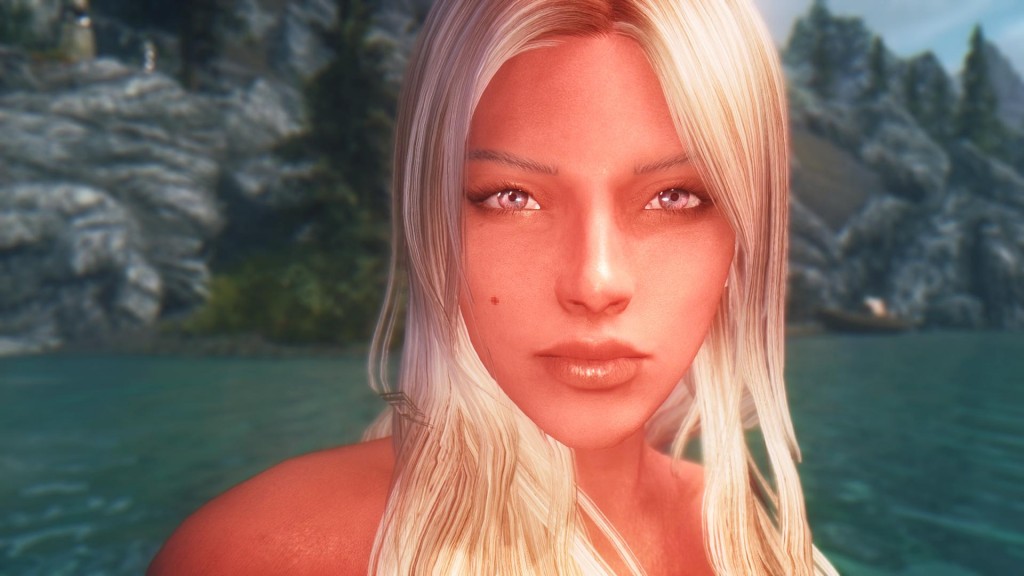 This mod gets a close second place rating from me. It looks very fresh and clean. If you’re into the no makeup look, this is a great mod option. The only thing I don’t love is that the skin texture has some red undertones that look weird with my ENB (but it may not be a problem if you’re not using an ENB). 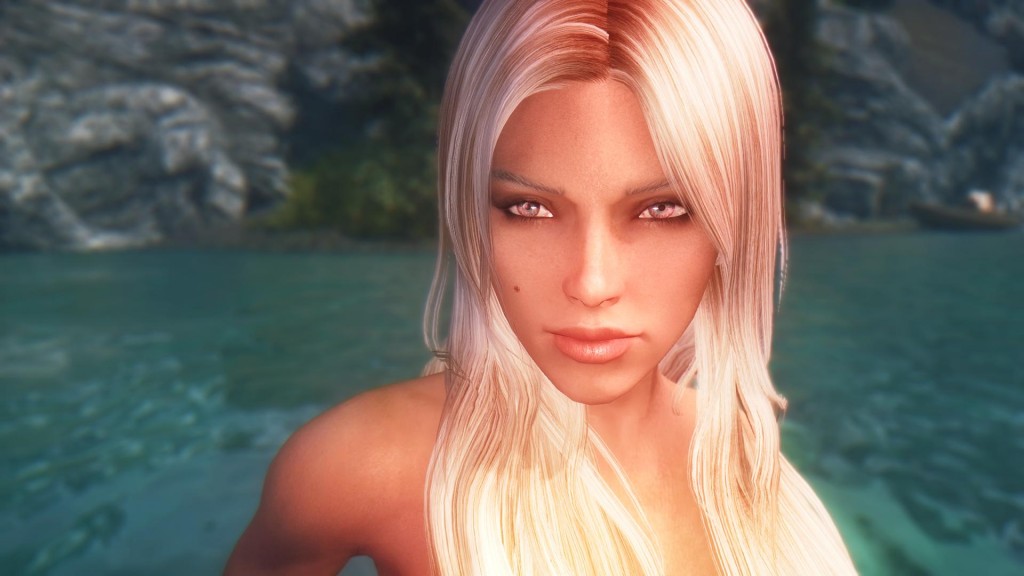 Here’s another texture mod that I think is great. The baseline eyeliner is a bit too dark for my taste, but I like the baseline lip color especially the matte quality that it has. The skin texture itself looks pretty realistic as well, with visible pores and fine lines. 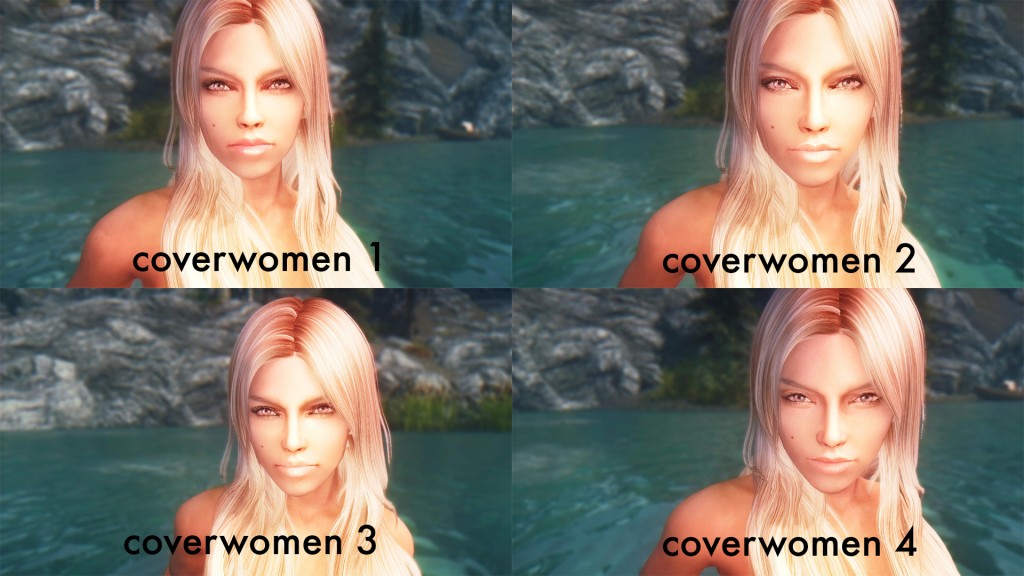 There are 4 different version of the Coverwomen mod and I tried them all. I thought the eyes were a little too mascara-y and the lips were too pale. The mod made my characters all look like they were wearing glittery stripper makeup, except for version 4 of Coverwomen, which made my character look washed out and eye baggy. 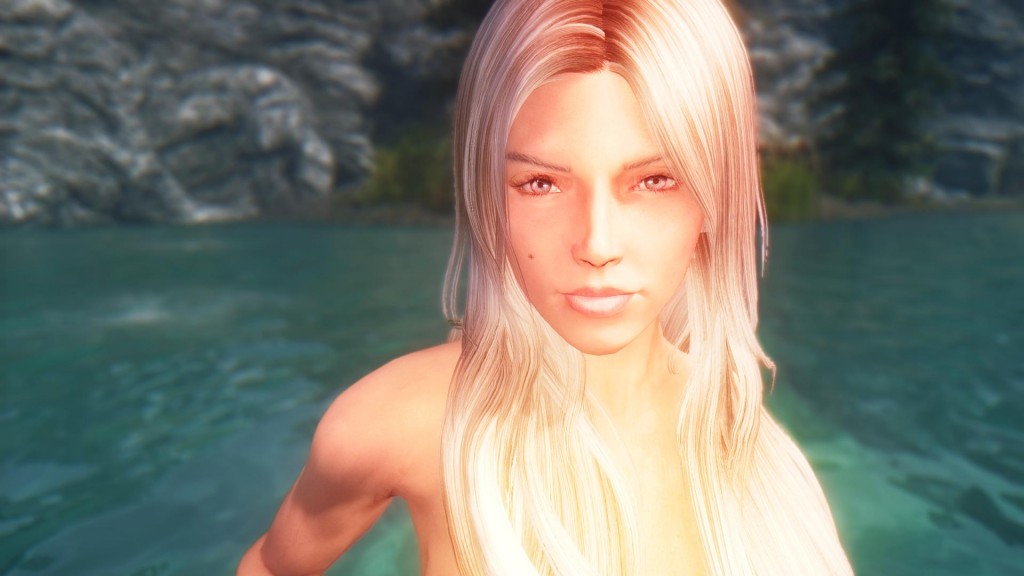 I used the “young” version of this skin texture on my character and it made her face look really saggy. I will say, the skin texture itself looks realistic, so if you’re making an older character, it could work really well for you. But, I don’t recommend using the “young” setting to make a “young” character.

I tried both the standard v3 version of this mod and the no makeup version. As you can see, the standard version’s makeup is super intense. I don’t love it – she looks like a drag queen Barbie doll. The “no makeup” version is slightly better, but the lips are still weirdly shiny and there’s too much glitter going on for my taste.

This texture is way too smooth and plasticky for me. The nose shadow in particular is very slight, so it gives my character a one-dimensional Voldemort-like look. This texture could be good if you’re looking to make a very CGI/anime looking character, but it’s not very realistic.

Ok, hope you guys found that comparison helpful!  I know everyone has their own taste, so try not to take offense at my opinions – if you have other thoughts, feel free to share in comments. Also, read my post on more realistic male face textures ;)