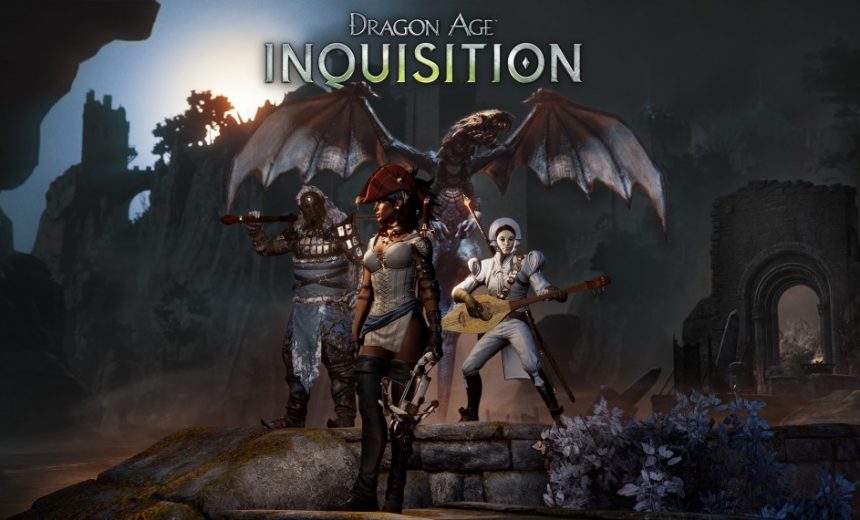 Well, by now you might have downloaded the Dragonslayer DLC that came out this morning for Dragon Age: Inquisition multiplayer. And you might have realized that the learning curve for this DLC is a little steep. So here I am with a full guide on the new DLC and some tips and tricks to help you along the way!

First off, let’s start with a little video clip of me destroying a high dragon on Perilous just so you know I mean business:

You should already know that there is one new map, three new characters, and a dragon in the new DLC. Read all about it here.

And now for the things they don’t tell you but you should know:

1. There have been some major improvements in inventory control and skill trees

Now you can select multiple items in your inventory and bulk destroy them for parts. Yay!  You can also craft respecializations (under “Weapon Crafting”) to redistribute the points in your skill tree for each character. That means no more grinding until Level 20 to try out new powers, whew!  But make sure you don’t craft the respecialization unless you’re 100% ready to change your skill tree, because the effect is immediate and you don’t get to hold onto it and use it later.

2. You must manually download the DLC in order to get the new map of Fereldan Castle.

I know that seems self-explanatory, but actually if you don’t manually download the DLC and start your multiplayer anyway, your game will auto-update with a patch to make the new characters and dragon call crafting available (at least on Xbox One) but the new map will not auto-update.  So, if you’re wondering how to get to the Fereldan Castle map, that’s step number one – download the actual DLC from the store.

3. The Fereldan Castle is WAY harder than any other map.

Enemies will spawn over and over again, probably about 4 or 5 times as many enemies than the other maps.  And they come from all directions, not just in front of you.   Be warned.

4. The Arcane Warrior is no longer god-like.

Don’t get me wrong, it’s still the best character to solo Perilous and the Fereldan Castle with, but they nerfed the Spirit Sword to do less damage and use up more mana. The days of spamming DPS are over, sigh.

Step 1 – Craft the dragon’s call in your “weapon crafting” menu. Use your shittiest Tier 1 materials. You do NOT need to equip this item in your inventory, you only need to craft it.

Step 2 – Go to or create a lobby at the Fereldan Castle. Choose your dragon (or leave it on random).

Step 3 – Start the match and battle your way through to the end of Zone 3.

Step 4 – At the end of Zone 3 before you head through the door, you should see a big gong. If you have a dragon’s call in your inventory, you should be able to press your controller button to hit the gong.

Step 5 – Once you hit the gong, your dragon’s call is gone. You’ll have to craft one every time you want to summon a dragon in a match. It’s also gone even if you don’t make it to Zone 5.

6. But don’t even bother killing a dragon, you don’t get diddly squat for it!

I’ve killed a few of them today and supposedly according to Bioware’s blog post, you’re supposed to get a loot drop (for Perilous, the chances should be good that it’s a purple unique item, says Bioware) … I haven’t gotten ANYTHING in a drop after killing a dragon. Nothing. Nada. Zilch.

Also, there isn’t even a Prestige Icon, Title, or Banner that you can earn by killing a dragon. It’s all a lot of effort for no gain.

7. Some of the new character powers are glitched or bugged.

I’ve unlocked all the new characters and so far I like Isabela (the Duelist) and Zither (the Virtuoso) the best. That being said, some of their powers are bugged. In particular, Zither seemed useful as a great support character with his heal on kill Sing-along power … but it’s bugged so don’t bother. And Isabela’s Gangway power (though cool) occasionally throws you through walls and off the map. Those are the two major ones that have happened to me already … for a full list of DLC bugs, see this thread.

8. The new characters have different gameplay mechanisms that might need some explaining:

Isabela (the Duelist) – to make the most of Isabela, you need to combo her Vendetta attacks (Bolt, Broadsides, etc.) with her other power attacks (Flashing Steel) to build elusive. You do this by setting Vendetta active on an enemy (you’ll see a little skull and crossbones floating over their heads when it’s active) and killing them with something like Flashing Steel. You’ll see three circles at the bottom of the screen that fill up gold every time you earn an elusive … elusive stacks and adds power to your attacks, and some powers (like Swashbuckle) will use up all your elusive.

Zither (the Virtuoso) – player with Zither is kind of like playing Guitar Hero. Every time you want to use a certain power, you need to press three buttons in the right order, and the Right Button to execute the power. This is great because the “powers” you upgrade in the skill tree don’t have to be mapped to the buttons like every other character. Also, this character literally plays music as you’re tapping the combos, and that’s pretty effing adorable.

Skywatcher (the Avvar) – You can basically charge this character with an elemental power and have it apply to a non-elemental attack. You’ll see the two circles on the bottom that will change to whatever elemental power you have stored up for your next power attack.

Check back later this week for my recommendations for best Duelist, Virtuoso, and Avvar builds!

9. What are the new weapons in the Dragonslayer DLC?

Bioware assures us there are some super rare dragon weapons, but I’ve spent 50,000 gold on chests and have yet to see one thus far …

That’s it for now – I’ll keep updating this post as I discover more handy tips to share with everyone.  Check back soon for updates and leave a comment if you have anything to add :)