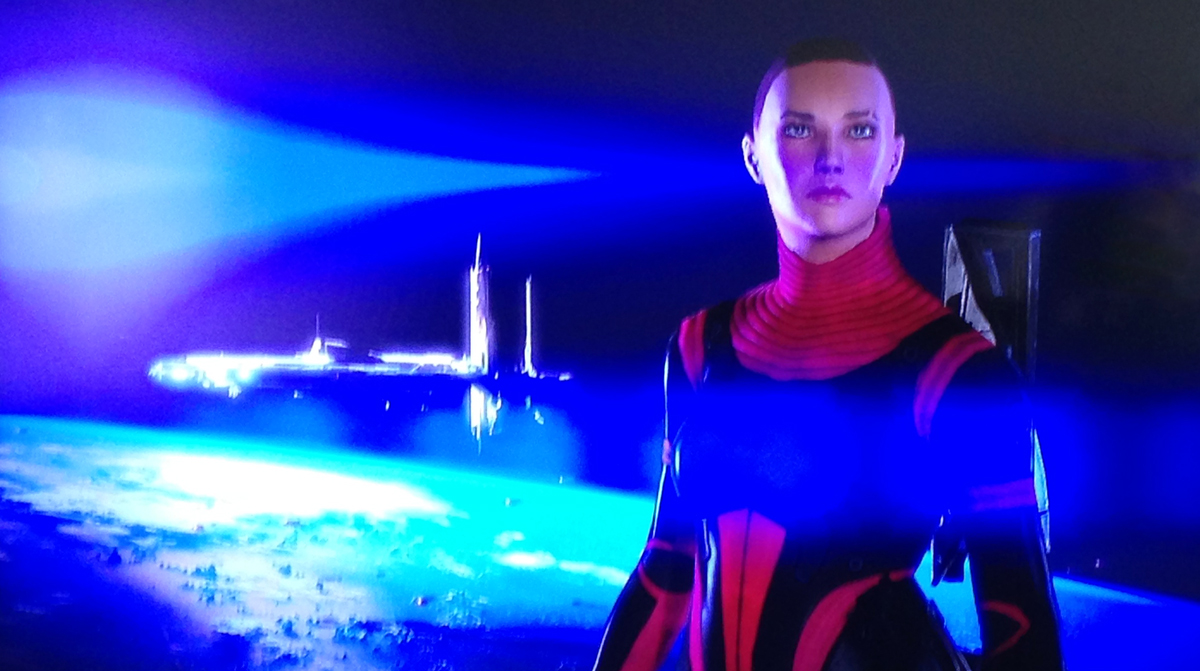 I am going through a serious Mass Effect withdrawal right now.  I cannot wait until ME4 comes out … in the meantime, I am replaying the whole series now.  I’m about midway through ME2 and I’m trying to make different choices than I have in my last two playthroughs but somehow I can’t.

My Femshep looks virtually the same as I made her in the first two playthroughs (see photo above).  I still make mostly Paragon choices and the same romance choices.  It’s amazing the kind of attachment you can form to *your* Shepard.   I think it’s because I identify with my version of Shepard so much so that to change her characteristic would be to change a part of myself (ooOOooh, so meta).

Am I the only one who does this?  I mean, it’s to the point that I can’t watch promo vids or youtube uploads of ME3 games with “other” Shepards without feeling like something’s just not right.  For me, Shep is always going to be a female badass with a soft spot for Kaidan Alenko … it’s weird seeing a male Shepard and don’t even get me started on gay Shep (no offense to the gays, do your thing … just not with my Kaidan, ok?  Cool.).

Anyway, with that in mind, here are what I think are the top 10 most controversial and polarizing choices you’re called upon to make in the game (and in all 3 playthroughs, I have always made the SAME call):

This was a no-brainer for me.  I didn’t want to be responsible for genocide no matter what the consequences.  Nuff said.

My first playthrough, I was so annoyed at the Council that I let them die but then I reloaded and saved them and that’s how it’s been ever since.

This was a tough call for me because I really liked Mordin and the only way to save his life is to not cure the genophage.  But, ultimately, I’ve chosen to cure the genophage – I think Mordin would have wanted it that way.

7.  (ME2) Destroy or keep the Collector base

I’ve gone with the Paragon option both playthroughs and destroyed the Collector base.  In reality though, I think keeping the single biggest source of intelligence on the Reapers is the more logical choice.  Plus, it doesn’t make a difference in ME3 either way.

Seriously?  Does anyone actually kill Wrex???  He’s only one of the best characters in the game with some of the best dialogue in ME1.  Plus, he’s hilarious in the ME3 Citadel DLC drunken party scene.

This is the one Renegade decision that I always seem to make – let Zaaed kill his long time rival and sacrifice the factory workers.  What can I say, I have a soft spot for the Z-man, RIP.

3.  (ME2)  Cheat on your original love interest

Ok, so you’re on a break with your love interest from ME1.  What’s a Shepard to do?  I didn’t cheat on my first playthrough and I accidentally got locked into Jacob as a love interest in my second playthrough.  This time around, I’m going to romance Thane.  Since he has a fairly dramatic role to play in ME3, it will be interesting to see what changes in the story, though I fully intend to return to Kaidan in ME3.  The problem with ME2 is that every romance option for Shepard felt like a booty call – a lot of the dialogue got over-sexualized and frankly awkward (I’m looking at you, Garrus and Jacob!).

2.  (Me3) Destroy, Synthesize, or Control the Reapers

Yes, I think this choice is only the 2nd hardest in the ME series because the ending is terrible and unsatisfying no matter which you choose.  Even with the Extended Cut DLC, I found it hard not to feel disappointed.  I chose Synthesize in my first playthrough because that seemed like the “best” ending but then I chose Destroy in my second playthrough because it felt more satisfying.  I’ll probably choose destroy again this playthrough because the idea of Joker and EDI having weird synthetic sex after my Femshep had to die and not be reunited with her lover is very irritating.

Of course, I think this choice is the most polarizing one in the Mass Effect series because people always seem to be firmly planted in one court or the other.  To point – I have not, nor will I ever, have a playthrough in which I save Ashley over Kaidan.  Ashley is an abrasive xenophobe who is also fairly unattractive.  Kaidan is a much more interesting as a character, is a better teammate, has a way better voice actor, and provides some eye candy.   Kaidan has been with Shepard since before the events of ME1 so it’s only natural that he’s the canon romance for Femshep IMHO.  Plus, he’s the only straight love interest who doesn’t feel like a random hookup.

“Ashley, you’re terrible and we hate you.” ~ Everyone 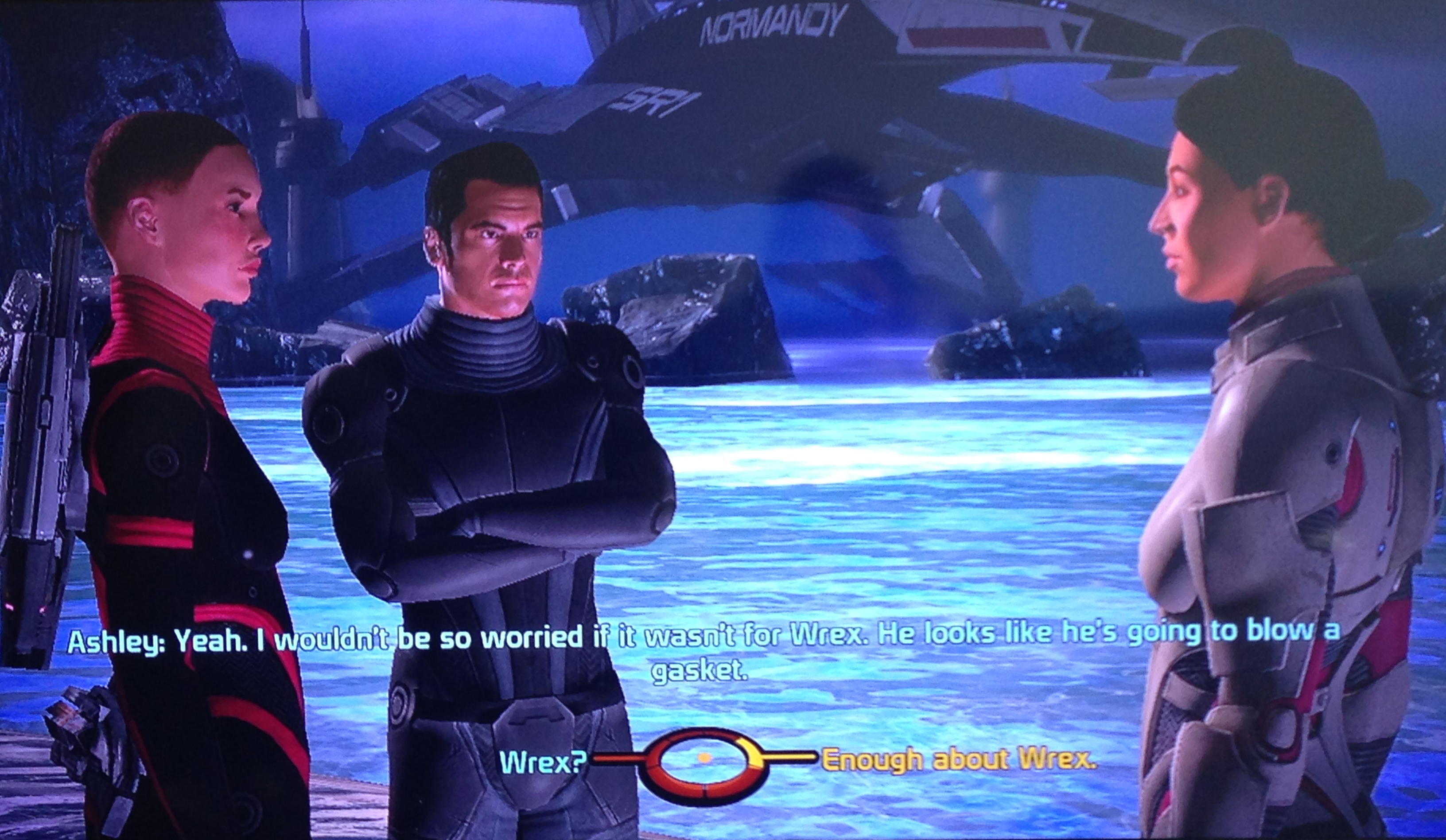 Anything to add?  I’m really curious to see if you all feel as strongly about your version of Shepard!  Let me know in comments!