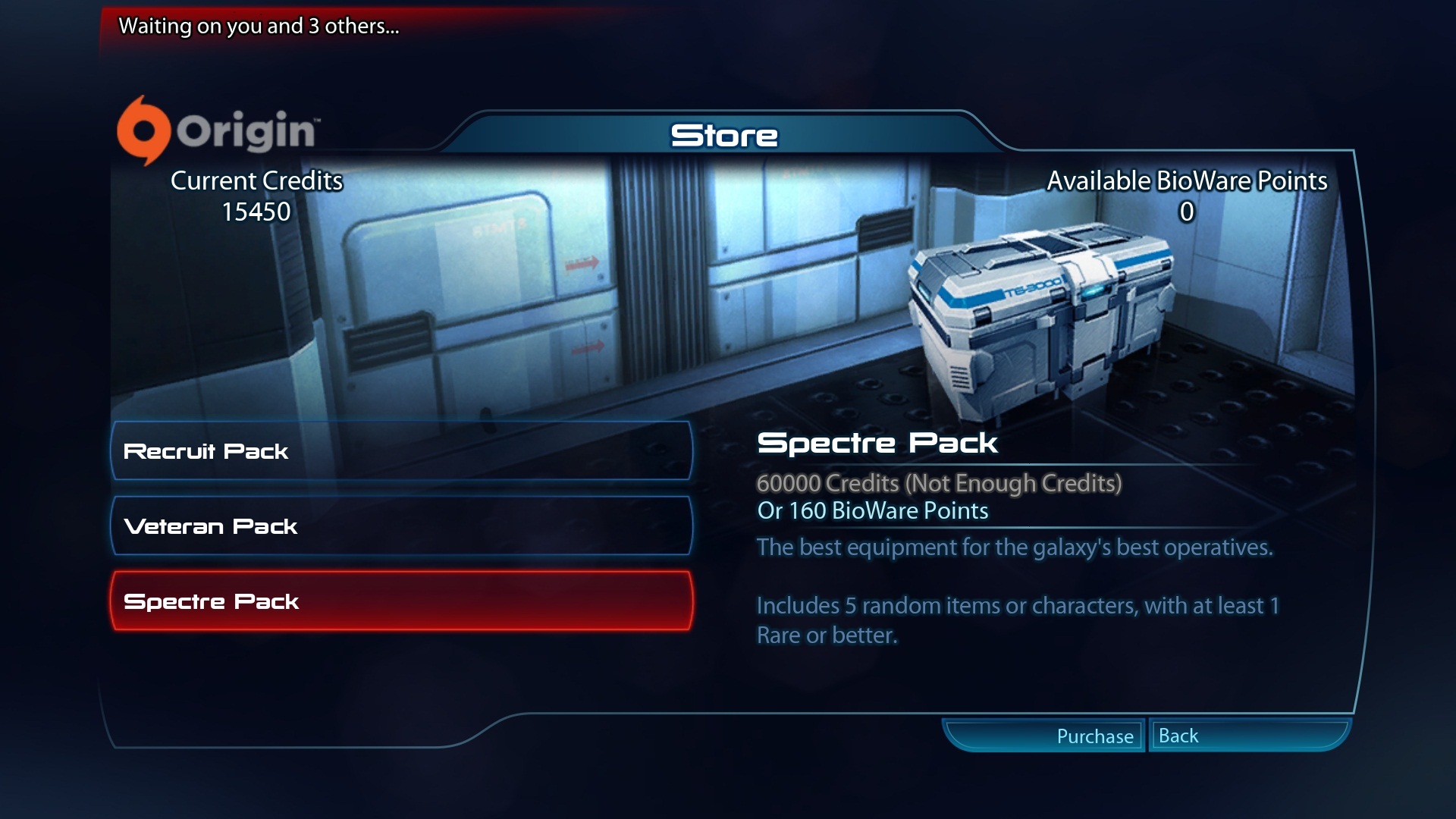 From personal experience, I believe a Regular Spectre Pack wins, hands down!

The only time you should even think about buying a Premium Spectre Pack (PSP) is if you’ve just started playing and you don’t have all the common, uncommon, and rare weapons/characters maxed out yet and you want a good weapon to start farming credits with.

Otherwise, the PSP is just full of fail.

Let’s compare the stats, though:

PREMIUM SPECTRE PACK (PSP):  Even more of the best equipment for the galaxy’s best operatives. Includes 5 random items or characters, with at least 2 Rares or better and a higher chance for Ultra-Rares.  Cost – 99k.

Supposedly, the percentage chance breakdown can be found here (source), but I don’t know how accurate these numbers are or where they came from – the source says they are “estimated” numbers.  So, I’m going to analyze this with common sense, but feel free to reference the source if you want hard numbers.

Assuming you’ve already unlocked and maxed out all your Common, Uncommon, and Rare weapons/characters/gear, all you care about now is getting your Ultra Rares.

Disregard the first four slots in both Packs – for all effective purposes, they will always be Rare or lower.  Yes, there is supposedly a chance for an Ultra Rare in a PSP in the fourth slot but I’ve never seen it happen and I’ve bought hundreds of them.

For the last slot, you will definitely get at least a Rare in both a PSP and SP.  There is also a chance for an Ultra Rare in both packs.

So the real difference for the packs is the chance at Ultra Rares in slots four and five, slot four being negligible.  A PSP costs 165% the amount of credits a SP costs.  Whatever the actual percentage chance at an Ultra Rare in a PSP vs. a SP, do you think it exceeds a 165% differential?

So to test this, I am going to answer the question: if you have 1.5M credits and you buy 15 PSP’s, will you get the same or more Ultra Rares than in 25 SP’s?

That’s a good question – I doubt it, but I will experiment and let you know the results over the coming weeks.  I will save up 3M credits and spend them on 15 PSP’s and 25 SP’s and post the results!

UPDATE:  THE SPECTRE PACK IS THE BETTER CHOICE – SEE MY DATA AND RESULTS HERE!

What is your opinion on the age old Specre Pack debate?  Post in comments!