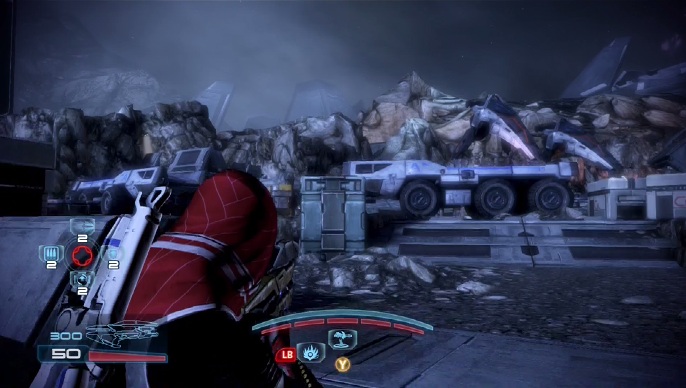 This exploit no longer works after the last patch – you can still get up to the mountain, but you can’t become invincible any more. Fun while it lasted! :) As a side note, if you put on some armor piercing mods or ammo, you can still kill enemies while you’re inside the mountain.

I’ve known about this for quite a while, but I don’t think many people know about it – I’m posting it because, well, it’s a lot of fun and it’s not really cheating because 1) it’s built into the game, 2) you still have to run around killing everything, and 3) I don’t mind if Bioware fixes it because it’s only really worth doing a few times before you get bored.

This only works on Firebase Condor.  While you can choose any enemy, I would pick Reapers because you will want them to bring your health down just enough.  Cerberus has Atlases, which will knock you into the hole before you want to jump and Geth has Primes, which take down too much of your health.  Don’t worry, this will all make sense soon.

This glitch works with any character (except maybe the Turian Sentinel).  I like to play with the N7 Fury Adept because the Annihilation Field lets you plow through enemies very quickly, especially equipped with the Piranha X.  It’s easier with biotics because enemies can still stun you and overwhelm you, making it hard to fire weapons quickly.

Take cover against the “jump point” and press forward on left thumbstick like you’re about to jump over the rock.  The arrow to hurdle over should appear – as soon as it does, start mashing the A button and remove your finger from the left thumbstick.  This should launch you up into the air.  Depending on the angle of your jump, you will either be launched really far in the air or right onto the rocky plateau – either way, your goal is to land atop the plateau.  Usually, it will appear like you are against an invisible wall once you make it up there – press A to get off the wall then move forward slowly using the left thumbstick until you’re atop the edge of the plateau.  If you go too far, you will fall through the invisible hole in the center of the plateau, which you don’t want to do quite yet.

A lot of people know how to get up to this point and they tend to use it as a sniping position.  You, however, are more advanced than that – read on!

4.  Fall through the hole and die

So, you’re on the plateau – get shot at until your health is LESS than half a bar.  Once your health is low enough, jump through the invisible hole in the center.  You should fall into the rock you were just standing on – in this place, nothing can hurt you and you can’t hurt anything, either.  At this point, your health should be literally nothing – one empty flashing red bar.  Walk backward until you fall again – this time you will spawn where you first started.  You should still have one flashing empty red bar of health and now a full shield.

The key to this is, when you’re on the plateau, to have your health down literally to the point that one more shot will kill you.  Then, falling through the hole will do just enough damage to “kill” you – your squad members should get the message that you’ve died (“Squad member down”) … but you won’t be dead, you’ll be invincible!

This takes some practice with the timing, especially on Platinum.  (Tips for doing this on Platinum – 3 hits from a Ravager will get you down to where you need to be.  Do NOT get warped by a Banshee as it will kill you too soon.  Try to kill everything but a couple Cannibals or Marauders, as it will be easier to control how much you get hurt)

5.  Run rampant on a killing spree

Now you should be invincible!  Your shield will be super strong, but it can still be taken down all the way.  Your health will eventually regenerate but it, too, can be taken back down.  Don’t worry – you’ll still be invincible.  If you lose all your health, your screen will go dark red as usual but you won’t die.  Also, you can still get “grabbed” by Banshees, Phantoms, Atlases, and all the bad instakill guys, but you will not die!

Yes, everyone in the match can become invincible!  But, you can’t activate the invincibility (ie. fall through the hole) at the same time.  So you’ll have to take turns becoming invincible.

Just because you can’t die, doesn’t mean you can’t get overwhelmed.  Sometimes, so many things will lock onto you that you will get stuck or just continually grabbed – this is why being an N7 Fury is helpful.  Towards the later Platinum rounds, you may want to jump back onto the platform and kill things from there so you don’t get swarmed, especially if you’re soloing.

Speaking of soloing, the fastest I’ve soloed this map with this glitch is 38 minutes using an N7 Fury Adept with a Piranha.  With a group of four invincible team members, I’ve completed this map in just over 30 minutes.  You get around 180,000 credits for soloing.  Obviously, doing a legit match on Glacier or White is more efficient for farming, so this glitch is mainly just for fun.  I like it because it allows you play with the non-Platinum class characters that you normally don’t get to use.

Let me know if you like this tip in the comments or via email!