Ok, so you know how to extract textures by now.  Let’s talk about the second step, editing textures.

… Or use whatever image editor you’re comfortable with. I won’t give a tutorial on how to use Photoshop because that would take forever. Instead, here’s just a general overview for the different types of files:

If you followed my advice about extracting and saved your Texmod extracts as .TGA, this is pretty straightforward. Edit the file in photoshop and hit save. That’s it!

If you extracted files manually, you’ll need to do a couple things:

Here is the list of what formats to save as for armors/clothing:

*Note about Norm files in Photoshop – PHOTOSHOP CANNOT SAVE NORM FILES PROPERLY! You need to save the norm as .TGA and then import it into DirectX Texture tool and use that program to save it to .DDS format. Otherwise, you’ll get a really weird film over your texture that makes it look like it’s covered in dirty dishwater :)

Disclaimer: This is just how I do things – it doesn’t mean there aren’t better ways or more efficient ones!  I use Photoshop but if you use something like GIMP, here is a pretty good tutorial.

Diff – No special tricks for this in general.  There are some things you should know if you’re making a custom skin texture, however.  Read my separate tutorial for skin textures here.

Spec – The Spec is tricky sometimes. Depending on what you’re replacing, there could be a weird glow (ex: Defender Armor spec gives off an orange glow, Kaidan’s default armor gives off a blue sheen). You can fix this by editing the alpha channel and by coloring the spec to offset the glow. For example, if you’re replacing the Defender armor, the spec should be orange, like this: 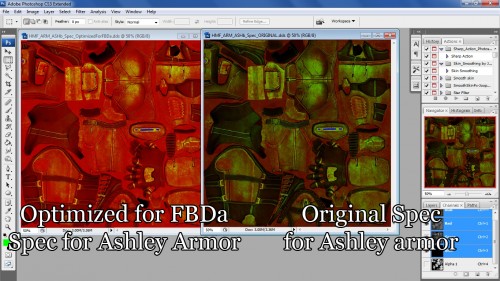 For Spec files, just remember that the lighter the tone, the more light will reflect off it in-game. If you want no special reflection, make sure the alpha channel is black in the areas of interest. For example, Kaidan’s default blue armor has a blue sheen that will be on it regardless of the spec colors – the only way to get rid of it is to edit the alpha channel.  Just color it in black!

Messing with the specs some trial and error, unless you’re replacing certain things without special specs (Shepard’s black dress is super easy to replace, and doesn’t require messing about with the spec – in fact, most casual outfits do no have special specs).

Norm – I usually don’t have to create a norm when replacing textures because I use the original norm or extract one from elsewhere in game. But, to create a norm, simply save your spec image as a V8U8 .dds file.  If you’re using Photoshop like me, you’ll have to be aware that norm files are not saved correctly in Photoshop.  You must do the following instead:

Well, that’s the skinny on editing textures … ready for the next step, replacing the old texture with the new one?  Read on!