You can do a lot with Mesh Modding, including replacing characters entirely – here’s an example where I replaced Jacob in the Citadel DLC Party with Mordin: 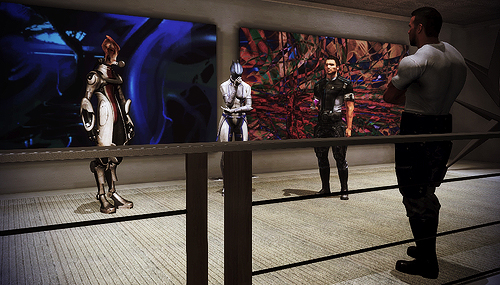 I already wrote a tutorial about how to replace meshes in-game, but here is a guide on how to extract them and edit them:

PS If you forget how to convert .psk to .udk, read my Hair Modding tutorial and scroll down to “Importing Long Hair Mods to Mass Effect” :)

Q. Can I use ____’s armor on _____?
A. Theoretically, yes.  But some things are harder to replace than others.  Again, the number of bones is the most critical factor – For example, you can port Kai Leng’s armor to Kaidan, but you need to delete all his hair bones in 3DS Max.  But if you want to port say Kaidan’s armor to Shepard, you don’t need to do additional editing.

Q. Can I replace Character X with Character Y in the whole game?
A. Theoretically, yes.  But, it’s not quite as simple as replacing a single .pcc file – there are several, if not dozens, of .pcc files that need to be replaced.  For instance, if you want to replace Kaidan with Mordin throughout the whole game, you’ll not only need to replace the BIOH_Kaidan_xxxxx files, you’ll also need to replace the Normandy global file as well as every BIOD_xxxxx file that has Kaidan’s mesh in it.  If you have a few scenes in mind you want to replace, it’s much more doable than trying to do the whole game.

Well, that’s it for mesh modding.  All good?  Read more on modding!