Q.  Help, my game keeps crashing!
A.  9 times out of 10, if your game is crashing because you installed a mod, it’s because you didn’t run the tocbinupdater in ME3 Explorer.  Every time you make changes to your game, you MUST run tocbinupdater!  If it’s not that, you may have a typo in Gibbed.  Probably an extra space or something when you added a texture to Gibbed (happens sometimes when you’re using hair mods – you change the hair mesh in Gibbed and press space after by accident).  If it’s not one of those two things, it’s something that has nothing to do with your modding.

Q.  I want to add shoes to Shepard’s underwear outfit.  How can I change the texture to do that?
A.  Any time you want to add something that changes the shape of something, you’ll need to edit the mesh using 3DS Max, not just the texture.  The easiest way to do this is to import your target mesh (in this case, Shep’s underwear mesh) and import another mesh with the desired attribute (in this case, any outfit with shoes).  See the Super Advanced tutorial on creating your own meshes for more information.

Q. Can I use ____’s armor on _____?
A. Theoretically, yes.  But some things are harder to replace than others.  Again, the number of bones is the most critical factor – For example, you can port Kai Leng’s armor to Kaidan, but you need to delete all his hair bones in 3DS Max.  But if you want to port say Kaidan’s armor to Shepard, you don’t need to do additional editing.

Q. Can I replace Character X with Character Y in the whole game?
A. Theoretically, yes.  But, it’s not quite as simple as replacing a single .pcc file – there are several, if not dozens, of .pcc files that need to be replaced.  For instance, if you want to replace Kaidan with Mordin throughout the whole game, you’ll not only need to replace the BIOH_Kaidan_xxxxx files, you’ll also need to replace the Normandy global file as well as every BIOD_xxxxx file that has Kaidan’s mesh in it.  Then you have to do the same for textures.  If you have a few scenes in mind you want to replace, it’s much more doable than trying to do the whole game.

Q.  What is your face code for your Shepard?
A.  I’ll do you one better – you can download the headmorphs for my Shepards here: 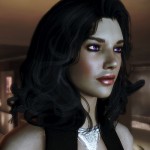 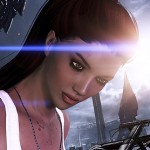 Every screenshot you see in my mods with a female Shepard is just a variation of these two characters :)  You’ll also need a custom skin texture to achieve the exact look.  I shared the skin texture here, but I did not create it and Eranen is the original creator – you can download her skin on Bioware if you are a forum member!

Q.  How exactly do you get rid of the orange glow on armor specs, like the Defender armor (FBDa)?
A.  Here’s what I do – no idea if it’s right, but it seems to work:  Make a new layer in Photoshop on top of the diff texture.  Paint it orange/red (try #ff3c00).  Set the layer to Multiply or Darken.  Flatten the layers.  It should look orange (multiply) or orange and green (darken).  Check the Channels > Alpha Channel – make sure the alpha channel is black.  Now save the image as a spec file (.dds – DXT5 mode).  It should now get rid of the orange glow!

Q.  How do I make the skin color on an armor mod match my Shepard’s face?
A.  Armors aren’t meant to show skin, so as far as I know, it’s not possible?  Casual clothes are fine to replace and show skin, but armors are hard.