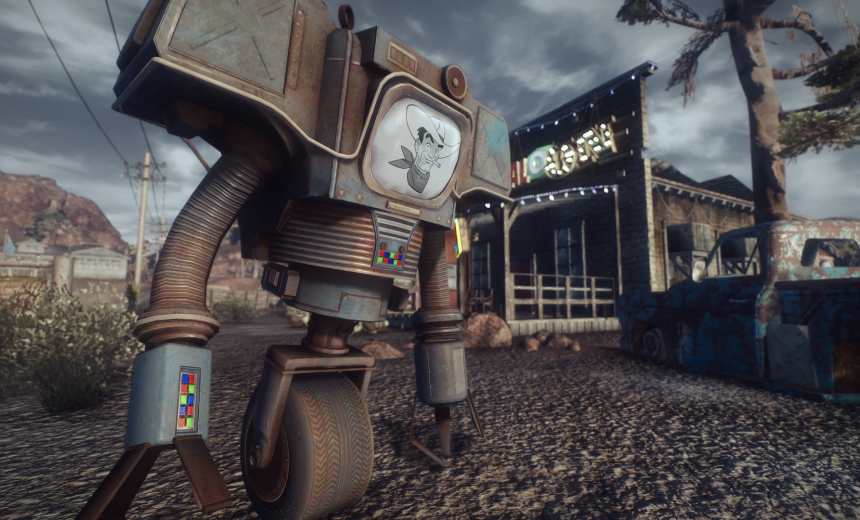 Since the release of Fallout 4 is imminent and I’ve already pwned Fallout Shelter, I’m getting myself into a post-apocalyptic mindset by replaying Fallout: New Vegas for the first time in 5 years! Obviously, I had to mod the game for the graphics to be enjoyable by my 2015 eyeball standards. Here’s a guide on how to get the most next-gen-est Fallout: New Vegas game ever! 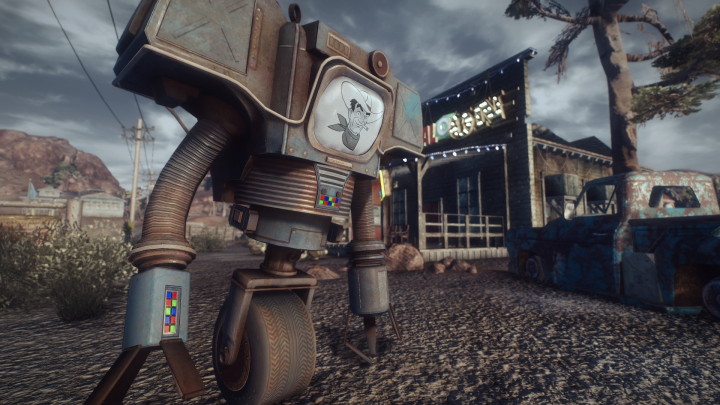 All of these mods can be installed with Nexus Mod Manager (NMM) unless otherwise noted. Contrary to popular belief, you do NOT need to download Fallout Mod Manager (FOMM or FOMOD). 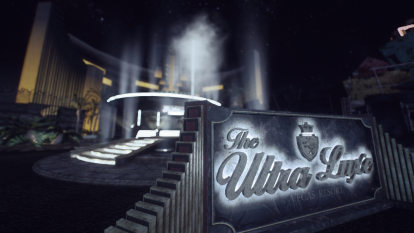 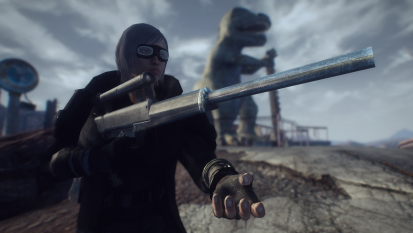 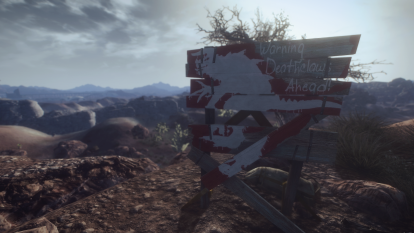 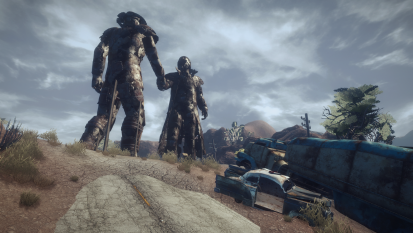 Required Mods (install in this order):

NVSE – Don’t ask what it is. Just install it, and install it FIRST – almost every mod requires it in order to work. It’s like a keystone species in nature, everything in the Fallout ecosystem depends on it to survive! You cannot install this mod NMM – you must manually copy the unzipped files into your game folder.

ENB – Installing an ENB is not required for the rest of the mods to work, but it IS required if you want a hella next-gen looking game. You cannot install this mod by NMM – you must manually copy the unzipped files into your game folder.

4GB Fallout New Vegas Updated – You will need this to run 4k HD textures in your game. Install this mod after you’ve installed NVSE and ENB – you will be launching your game with this launcher, NOT the original .exe nor the nvse.exe launcher. You cannot install this mod by NMM – you must manually copy the unzipped files into your game folder.

In order for the ENB to work, you’ll have to right click the 4GB launcher icon and where you see “C:\Games\Fallout New Vegas\FNV4GB.exe” (or whatever directory your game is located) you need to add “ –laaexe .\FalloutNV4GB.exe” at the end. So, it should look like this when you’re done:

If you a dirty, thieving pirate (no judgment! hehe) with a cracked version of Fallout: New Vegas, you won’t be able to use the 4GB mod on Nexus unless you do this:

You need to trick the 4GB Fallout mod into thinking it is legit – otherwise, you’ll just get the error message “’Error – Original exe modified -> Executable headers failed to validate.” The fix is super easy – just download the PEChecksum program, drag and drop your “FalloutNV.exe” file over PEChecksum.exe to modify the file, and then drag and drop your “FalloutNVLauncher.exe” file over PEChecksum.exe to do the same to the launcher. When you’re done, you will be able to properly launch your game from the FNV4GB.exe launcher!

Or, alternatively, skip the 4GB mod entirely and just use this 4gb patch program to alter your existing executable. 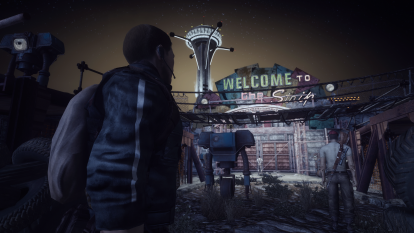 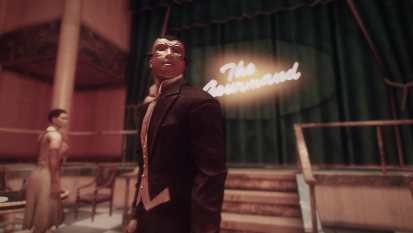 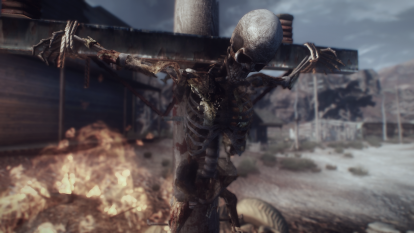 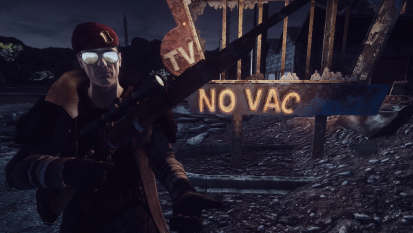 Rudy ENB – this is my favorite ENB preset for Fallout: New Vegas. While the original looks beautiful, it’s even better with a modified depth of field setting. I get 60 FPS with this ENB so it probably won’t kill your computer. You cannot install this mod by NMM – you must manually copy the unzipped files into your game folder.

New Vegas Stutter Remover – you’ll need this mod to avoid the weird lag that Fallout: NV has when modding.

New Vegas Anti Crash (NVAC) – literally exactly what it sounds like. If you want your game to crash less, use it.

NMC’s Texture Pack for New Vegas – adds HD textures to the game but only for large objects (roads, vehicles, trees, buildings, etc.) … which means that bottles, signs, posters, outfits are still woefully un-HD, sigh. I prefer these textures to the Ojo Bueno ones.

MGs Neat Clutter Retextures – this adds HD textures for all the smaller objects that NMC’s misses!

oHud (One Hud) – this lets you control you HUD elements and is pretty much required for taking clean screenshots. 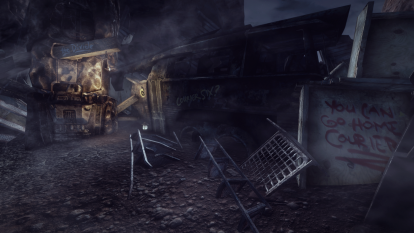 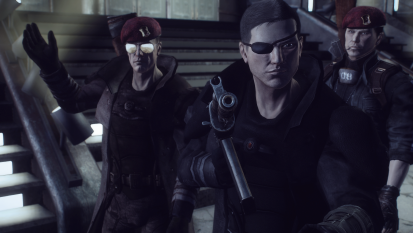 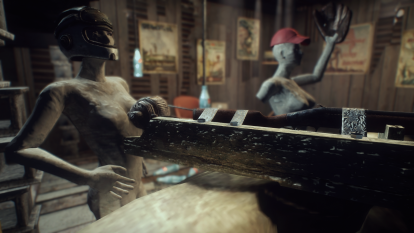 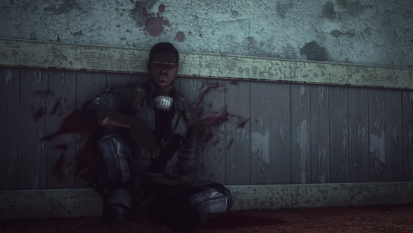 NVInteriors Project – this mod adds some more interesting places to explore across the wasteland.

Project Ultimatum – this mod gives NPCs a much more realistic and interesting reaction to you. NPCs and your character have better head tracking, and your followers actually unholster their guns when you do!

Repopulated Wasteland – surely there are more than a hundred people left in the Mojave, right? This mod adds more NPCs scattered around the place so that it doesn’t seem as lonely.

Monster Mod – because there just aren’t enough things trying to kill you out there.

Electro-city – this adds some much needed extra lighting to the Wasteland. 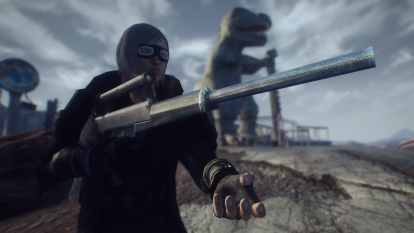 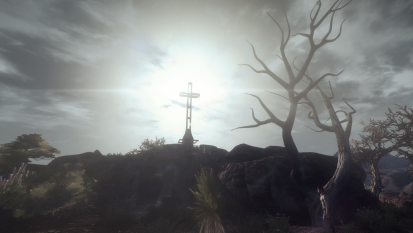 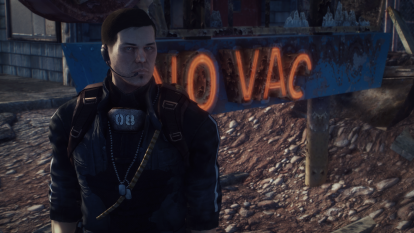 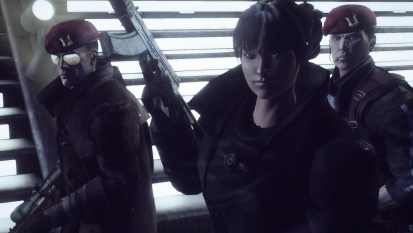 Type3 Body and Armor replacer– improves the female body to look more realistic, and adapts almost all the armors in game to the new body type.

zzJay’s Body & Face workshop – the best body/face textures for the female Type 3 body. The mod says it requires the “Archive Invalidation Invalidated” mod but don’t download it. If you are using NMM, it is already built into the program – just find Archive Invalidation in the dropdown menu up top after you’ve installed zzJay’s body/face mod, toggle it off, toggle it on again, and you’re all set!

Project Mikoto – adds a bajillion new hairs and stuff for your character creator.

Fallout Character Overhaul (FCO) – this overhauls the skin, hair, and eyes of all characters in the game. Install Project Mikoto first, FCO second (make sure to select the Project Mikoto option upon installation), then Eyes (overwrite FCO with Eyes).

Niner – adds a new follower who is pretty funny, in a manic drug addict kind of way. He’s also pretty decent looking as far as men in Fallout go – install this mod before FCO and then select the “Niner” option when installing FCO to make Niner look less like a punk ass teenager and more like a grown ass sexy man.

Weapons of the New Millenia – adds a whole slew of high res guns!

Ok, hopefully now you have all you need for a badass next-gen run of Fallout: New Vegas! If you have any other mod recommendations, let me know in comments!