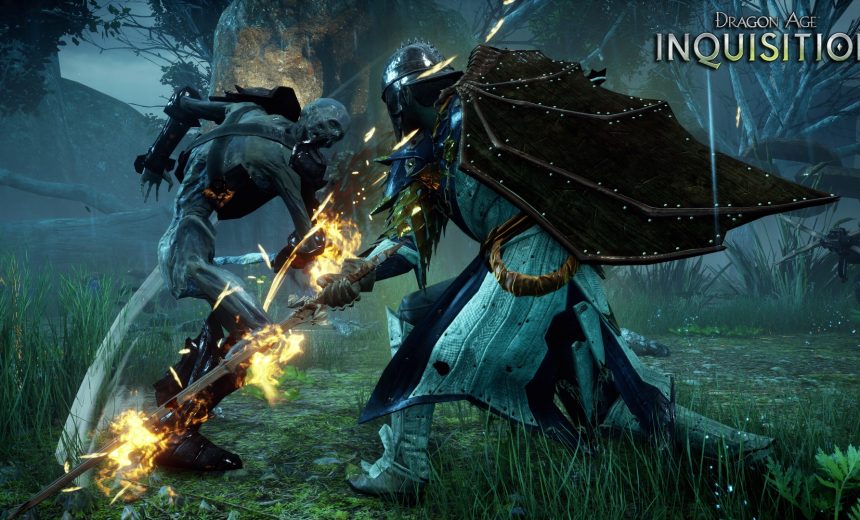 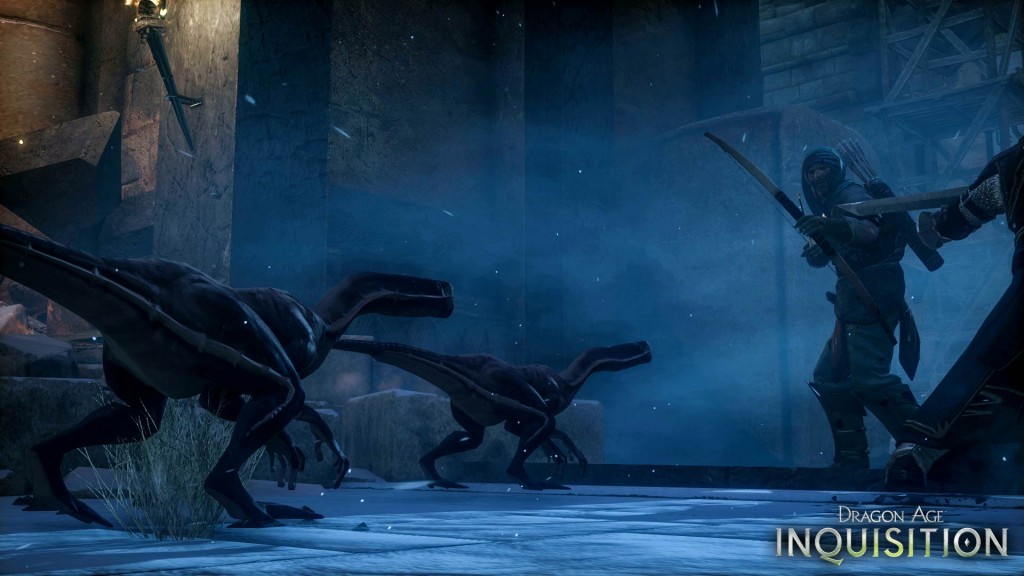 One of the best and worst things about Dragon Age: Inquisition Multiplayer (DAMP) is the weapons system.  The best thing about it is the sheer variety of weapons you can get (at the mercy of the Random Number Generator gods, of course) … and the worst thing is that there are so many different weapons, it’s really hard to 1) collect them all and 2) decide which one is the best.  Have no fear, I’m here to help you out!

Here’s my somewhat subjective list of the best weapons in DAMP.  I have almost most of the blue and purple weapons in the game, so my list is based on actual gameplay experience and not just pure stats.  If you’re looking for a complete and objective list of all the weapons and their Damage Per Second (DPS), you can find it here.

While there are two Unique staves (Pyre of the Forgotten, Staff of the Void), I personally think the Fury of the Veil and Mindchill staves are better all around.  This is mainly because they both have the chance to cast crowd control spells.  Veilstrike and Mind Blast both knock enemies back/down, but Veilstrike is a better power than Mind Blast because of its range.  However, the Mindchill staff has a pretty powerful Attack and Critical Damage bonus, so both staves are really viable on Platinum. 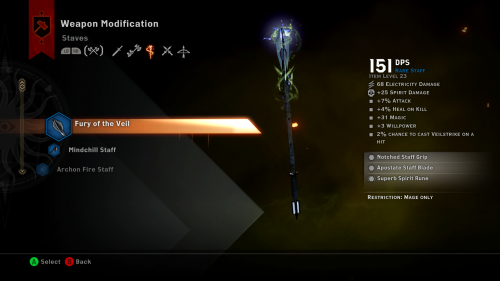 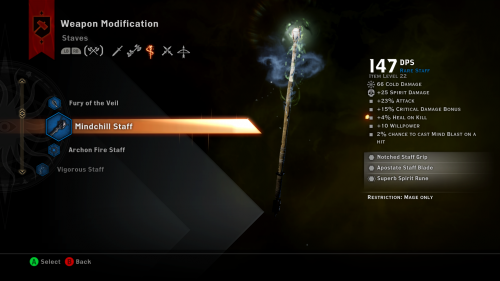 These are my top three weapons for archers – I personally think the Bow of Cruel Redemption is the best bow even though it’s only Rare because the optimal builds for hunter/archer don’t have health recovery powers so the 1% heal on hit is extremely useful.  I like Longbow of the Griffon mainly because it looks really cool to fire three arrows at once and does decent damage – the three arrows don’t triple your hits unless you’re super close to an enemy, though.  I don’t have the Punched by the Maker bow but the stats look really great, plus I love Walking Bomb as a power! 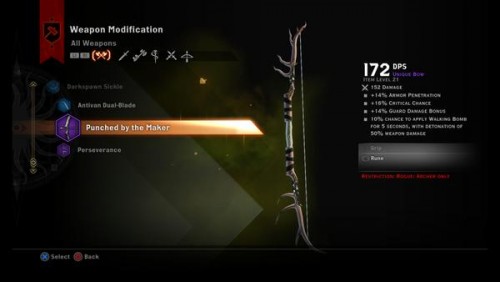 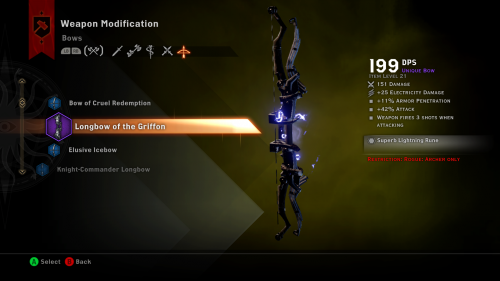 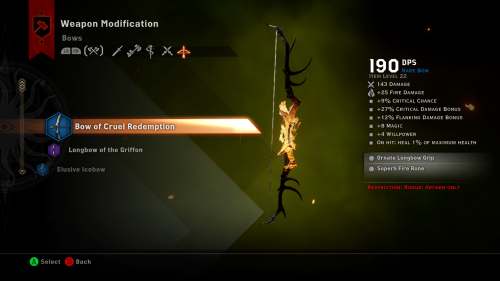 Again, I feel like the powers on these daggers are what make them the most useful.  Sadly, I don’t have Wicked Grace but I wish I did – rogue builds don’t include health recovery so the 5% heal on kill would come in handy.  Plus, poison is a great power to have.  I like the Agony dagger because of the critical damage and Chain Lightning bonuses, but I would prefer Walking Death (which I don’t have yet) for the Walking Bomb power. 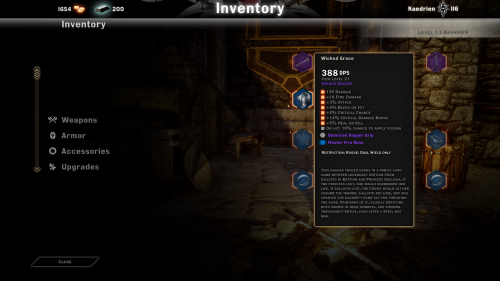 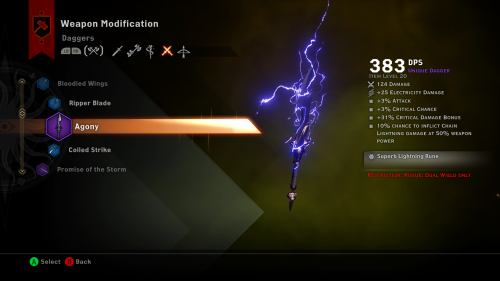 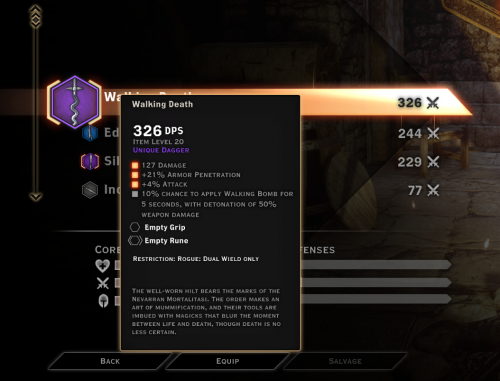 Although I have many of the more powerful unique swords (Sundering, Mhemet’s War Hammer, Siege’s End), I have to include Boon of the Spoon above all others for the pure fact that killing things with a giant spoon is way more fun!  The DPS/damage is not the best but the fact that you’re killing things with a giant spoon AND making targets explode is pretty satisfying!  I wish I had the Sulevin Blade – it would be amazing to cast Pull of the Abyss as a Reaver! 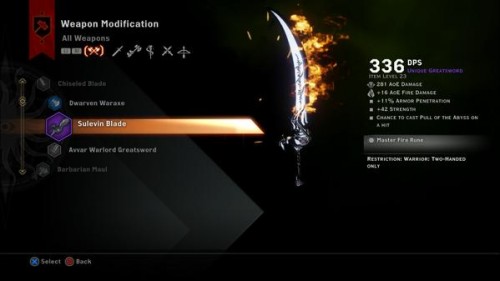 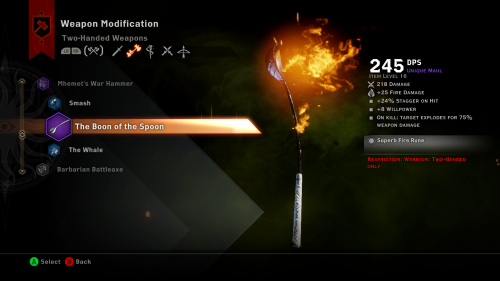 Caliban is by far the most useful one-handed sword.  It does a tremendous amount of Heal on Kill and it also does extra damage if you’re swarmed.  I also like the Dwarven Longsword for survivability – being able to gain 3 guard on hit is really valuable.  As for shields, it seems like the Shield of the Emperor is amazing from a stats perspective (I don’t have it yet!).  March of the Everlasting shield is basically the same as Caliban for powers, while Magehunter shield is the same as Dwarven Longsword, so I like to use them to complement the powers of whatever sword I have equipped (e.g. Caliban + Magehunter). 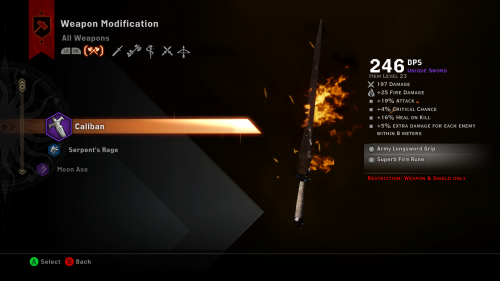 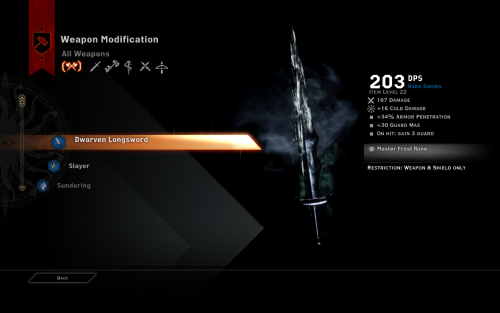 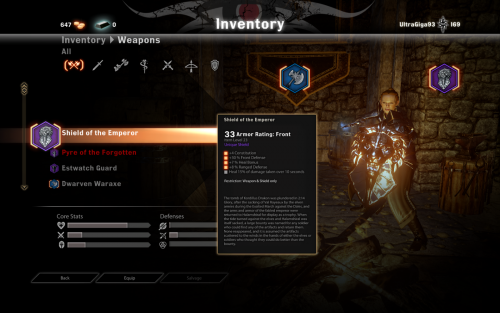 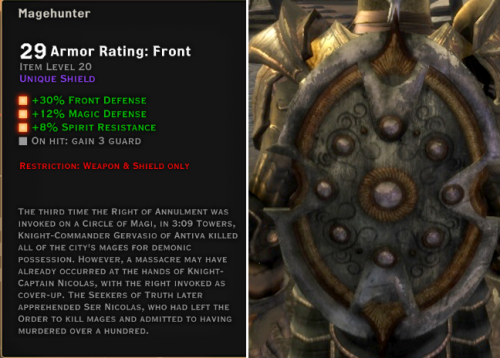 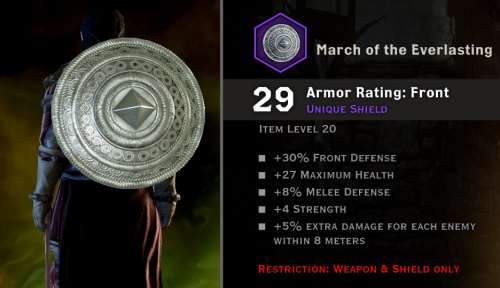 I hope this list is helpful for everyone else out there who is torn between scrapping weapons for crafting materials or keeping them in inventory!  Just so you know, I have about 3/4 of the really good rare/unique weapons in multiplayer and I’ve spent probably about 200,000 gold total.  To put that in perspective, that’s about 70 hours of gameplay and I *still* haven’t gotten everything I want.  The RNG gods are not kind in DAMP!!!  Just trying to temper your expectations of getting all the Uniques without investing a lot of time and energy into this game.

What is your favorite weapon?  Let me know your thoughts and opinions in the comments!