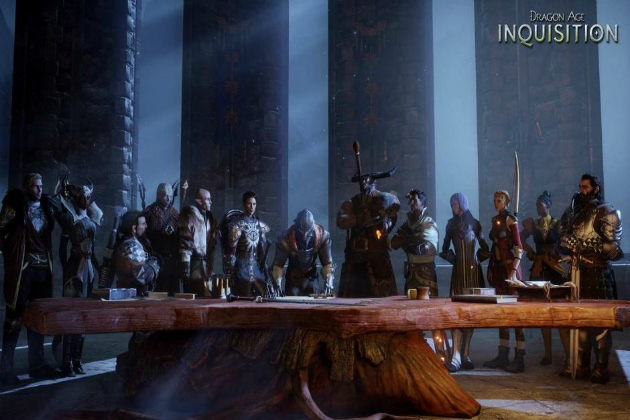 Dragon Age: Inquisition’s official release date was just announced – October 7, 2014!  That means about 100 days until I get my DA fix :)  I tried to pre-order on Amazon today, but then I realized I wasn’t sure if I was going to upgrade to an Xbox One or PS4, so I guess I have to decide that before investing in any new next-gen games.  If you guys have any thoughts on the Xbox One vs. PS4 debate, I’m all ears!  I think the PS4 seems slightly superior, but I have so much Xbox 360 data and gamerpoints that I hate to have to start afresh on the PS4.  Le sigh, first world problems :)

As for Dragon Age, if you haven’t seen the new gameplay trailer, here it is:

While the combat looks fascinating, I (like every other Bioware fangirl/boy in the world) am really looking forward to exploring the romances in the new DA.  I hope the whole crazy fandom just appreciates whatever romances they get instead of criticizing every little thing.  David Gaider’s Tumblr had a great response to in-game romances:

There will be an inevitable reaction from people who are disappointed they couldn’t romance someone with their character of choice, and some of them will rant at length as to how they were only deprived of said romance because of some agenda. We took away that romance because we’re mean, or because we’re boring and couldn’t we see that the romance they wanted would be so much more interesting? And that romance we actually put in is not only terrible but is homophobic/biphobic/racist/pedophilia/etc., which their romance pairing would not be.

Yes, at that time, the conversation of why we even bother certainly can and will come up within the team. For the most part, it’s not hard to soon remember that we bother because there are a lot of people who enjoy the romances we write very much—and if there are people who take it to an angry place, it’s probably because they passionately care. And also probably because we do sometimes make mistakes and can indeed do better.

I personally think the romance angle is what sets Bioware games apart from other franchises – even though the romances aren’t perfect, they add to the immersive element of the game in a way that no other game studio has been able to recreate.  I mean, there’s a reason I played the Mass Effect series multiple times but only got through Skyrim once – you develop a relationship with the characters in Bioware games that makes it feel like you’re revisiting old friends every time you turn on your console.  Anyway, so everyone just be thankful that Bioware bothers to include romances at all! :D

For everyone too lazy to watch the whole trailer, check out my Tumblr gif set here!

Have you pre-ordered Dragon Age: Inquisition?  Will you?  Let me know in comments!