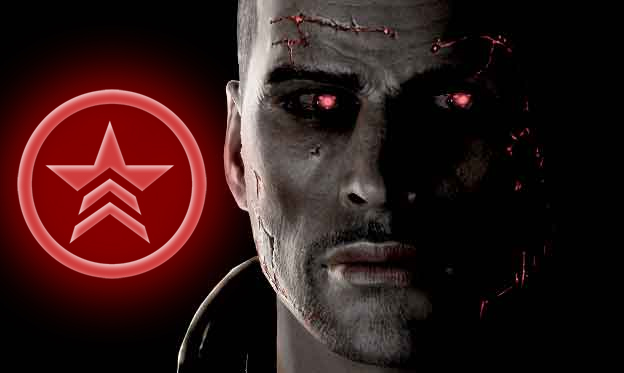 Having done a more Renegade playthrough this time around, I have to admit that being bad feels real good.  You’ll notice that there aren’t any “real” Renegade actions listed here (like killing the Rachni queen or lying to Wrex about curing the genophage) … I prefer my Shep to a badass, not an over-the-top full-Renegade douchebag.  Here are the top Renegade actions that put a smile on my face: 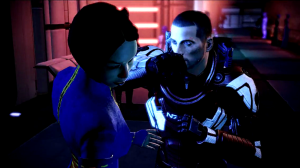 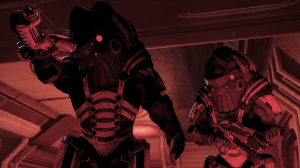 9.  (ME2)  Shooting the Krogan assassins that come after the Patriarch on Omega

Shooting those guys without warning actually made me feel bad at first but the Patriarch’s glee afterward made it all worthwhile. 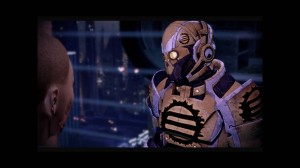 8.  (ME2)  Kicking that guy out of the window while you’re on the mission to recruit Thane

What kind of idiot doesn’t answer when Shepard asks him a question?  A dead idiot. 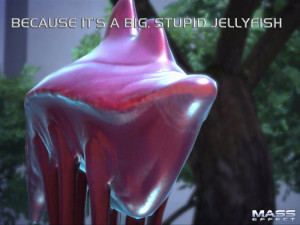 I dunno why I thought this was such a satisfying Renegade dialogue.  Maybe I have a thing against jellyfish.  *shrug* 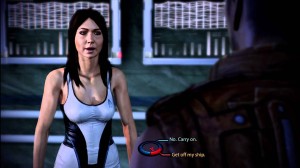 6.  (ME3)  Kicking Diana Allers off the Normandy

Yes, I recruited her specifically to kick her off the ship.  I love how butthurt she gets.  Bye bye, Jessica Chobot. 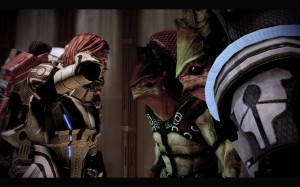 When in Rome … I love how surprised the Krogan looks afterward, like he can’t believe what just happened.  Headbutting a Krogan is like running face first into a wall – only badass if you do it on purpose. 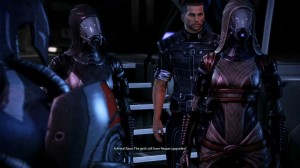 4.  (ME3)  Punching Quarian Admiral Gerrel after he fires at the Geth Dreadnought you are on

Did you learn nothing from the Collectors in the opening sequence of ME2?  You don’t blow up a ship Shepard is on unless you want to get your ass handed to you later. 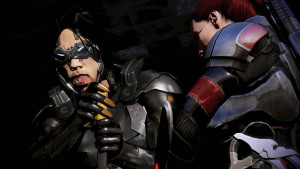 Stabbing Kai Leng was bad ass, but I think that shattering Kai Leng’s sword with your fist as he tries to stab you in the back is actually way badder ass.

“That was for Thane, you son of a bitch!”  Couldn’t have said it better myself. 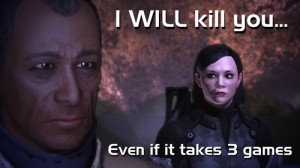 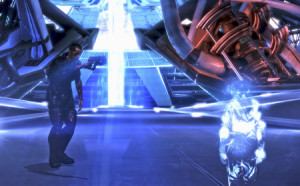 Rejecting the Catalyst makes the most sense given Shepard’s personality and history regardless if you’re Renegade or Paragon.  And once you hear the Catalyst say, “SO BE IT!” in his creepy Harbinger-like voice, you really feel like you made the right choice.  Couple that with what SHOULD have been the ME3 ending, courtesy of Arkis, and you have the most satisfying moment yet:

“The battle that follows is the epic conclusion, as Shepard watches, broken and bleeding, as everything s/he has put into this unified force throws itself at the Reapers. This is where all those decisions come to fruition. We want to see those War Assets fighting. The Destiny Ascension obliterating a Reaper with its main gun before being swarmed over by Destroyers, the Geth armada pulling along side to save her. The Salarian STG calling in a biotic artillery strike on cluster of Reaper troops. Wrex and Garrus, on the front sharing a  stern moment in cover, before nodding to each other, brothers in arms, before charging over the barricade. Back to back, they face down hordes of husks, Wrex shouting defiantly, “You think you can take our future!? You think YOU CAN TAKE MY CHILDREN?!”

We want to see the Quarian flotilla scrambling, all guns blazing, trying desperately to form a battleline, as one of the admirals quietly turns to their crew, signalling his ship all ahead full. “For the homeworld. Keela …” their words cut off as the live-ship rams a Reaper, exploding spectacularly and damaging two others. We want to see the Normandy frantically weaving through the wreckage, Joker and EDI yelling warnings to one another as the fleets explode around them. We want Tali leading a charge of Geth Primes against a Cannibal gun line. Rachni drones swarming over a Reaper Destroyer by the thousands, pulling it apart from the inside. We want to see Grunt wrestle a brute to the ground and unload his shotgun into his head.”

Which Renegade action gave you the most satisfaction?  Let me know in comments!