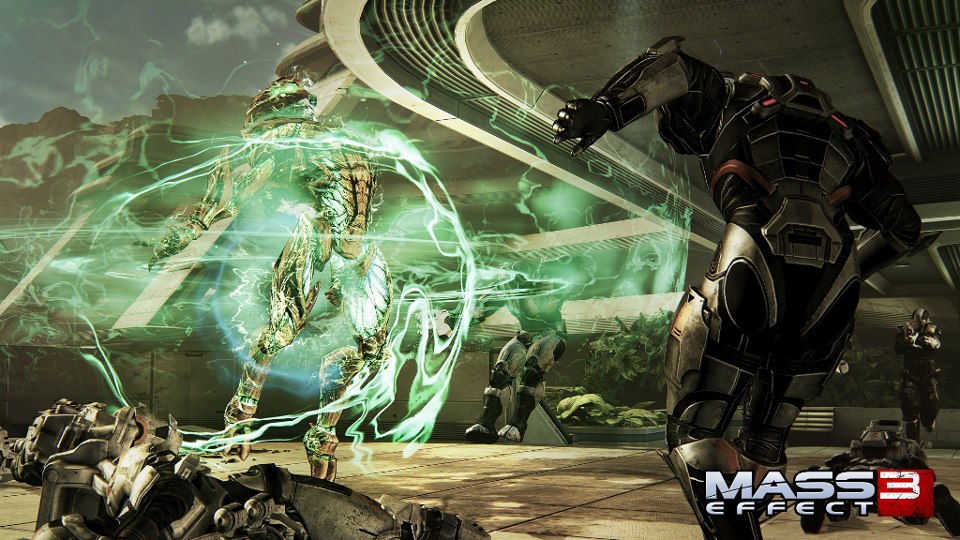 Well, now that I have all the new characters and have played some matches with them, I thought I’d share some builds and strategies with you!  Note: These are just the builds I personally prefer – you may disagree!  Please share your preferred build in the comments :)

Strategy:  Ok, so I skipped Dark Channel all together.  I think Dark Sphere is overall the better power and since the this character has slow cool-down speeds, I didn’t think I needed both.  You can detonate Dark Sphere manually or just let it float – you have to be careful to cast it correctly though.  It doesn’t pass through walls or move over obstacles – it basically just floats in the general direction you point it in.  Once an enemy is Dark Sphere’d, you can make a biotic explosion by hitting it with one of your Seeker Swarms.

BTW, I’m not at all convinced that the Ascension power does anything.

Strategy:  This character is such a beast.  I love not being able to get insta-killed!  My favorite strategy is to go up to a boss, pop a turret right behind it, lay down the Hex Shield in front of it, and then use Melee to drain its shields and health.  If you time it right, you can get a Fire Explosion from the turret’s Flamethrower and laying down the Hex Shield.  The turret, even while spec’d for full damage, will restore your shields along with the Melee power.  So, basically, you’re pretty tank-y.  If you equip a Cyclonic Modulator IV, you’re pretty much unstoppable on Gold.

I know some people opt to skip the turret entirely, but I think that’s a mistake.  The turret with Flamethrower is great for doing damage on enemies while you hold them with the Melee.  Also, you can throw it all the way across the map if enemies spawn away from you, doing damage while you take your sweet, tank-y time to get over there.  The super slow Juggernaut speed is another reason why I spec for additional ammo as well – I use the Harrier and I’m always running out of bullets and the Juggernaut takes forever to get to an ammo box!

Strategy:  This has been a tough one for me.  I decided to skip Concussive Arrows and go for the Armor-Piercing instead.  Because all your powers draw on a limited number of grenades, it’s kind of a waste to go spec out both Arrow powers.  Besides, the Cain Trip Mine is where all the goodness is, anyway!

For me, the Omni-bow is just too slow to lock on target and misses all too often even if you do get a lock.  So, I rely on the Cain Trip Mine.  I like to place them at choke points – be sure to place them on WALLS and VERTICAL SURFACES so that the red laser light is HORIZONTAL – I saw some guy using them like proximity mines, shooting them at the floor.  Since there is no radius detonation on the mines, that would require an enemy to step exactly on top of it if the light is pointing up.  I tried a Sniper build for this character but it’s honestly not great.  Anyone have any ideas?

Strategy:  I skipped Tech Armor all together and put spec’d out both hammers upon discovering that you can self-detonate Fire Explosions by switching from the Electrical to the Biotic Hammer.  Also, Tech Armor slows down power use and I wanted to be able to switch hammer types quickly.

The character isn’t nearly tank-y enough for how slow it moves.  Be prepared to get instakilled frequently.

Strategy:  I like to use short to medium range weapons for this character equipped with Incendiary Ammo.  Unload a clip, then Cloak, then Snap Freeze = murder!  The incendiary rounds and snap freeze will cause a fire or cryo explosion which is always handy.

I like to equip either Grenade Capacity or Warfighter Gear for the Fembot because the Repair Matrix is awesome!  It immediately starts regen for shields and while it’s active, you can get up if you’re killed without using a Medi-Gel.  I try to keep Repair Matrix active all the time if I can.

Strategy:  ???  Don’t use this build.  I still haven’t figured out how to use this character effectively!  Anyone have any recommendations?

What are you favorite builds?  Let me know in comments!