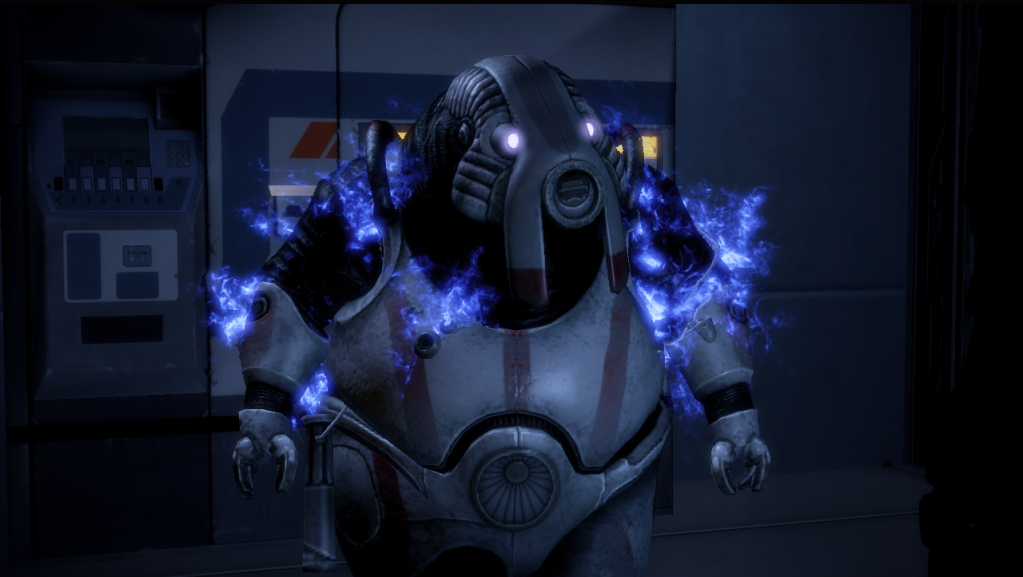 I find that people either love or hate this little ball of asthma … I, personally, think it’s hilarious to play as 4 volus characters in a match :) But as far as their builds, a lot of people misunderstand how to use them.  The Volus is made for pure support, so spec-ing for damage or hoping for the top score in a Gold/Platinum match doesn’t make much sense.  Here’s the breakdown for the new Volus classes:

NOTE: I will re-do the Volus Adept build because apparently the orbs don’t actually increase your recharge speed in-game like they’re supposed to (damn you, Bioware!).

Q:  How should I spec and use my orbs?

A:  Spec them for recharge speed, never fire your orbs unless as a defensive measure, rely on weapon damage.

Here’s why – you’re looking at 675 points for the maximum damage per orb if you spec everything else out for damage.  It takes almost 2000 points to kill a single baseline enemy (Geth Trooper, Assault Trooper, Cannibal) on Gold.  So if you shoot off all your orbs, it will barely take out one baseline enemy.

If you spec for recharge speed, you can get a 15% bonus for each orb active (10% base, +5% at Rank 5) and 4 total orbs (Rank 6), bringing your recharge speed bonus up to 60%.  That increases your survivability because it lets you spam Shield Boost every second.  This also allows you to equip something heavy and murderous like the Harrier X, which still allows you to spam Shield Boost every couple seconds.  Then, you can focus on doing weapon damage since you won’t be dead :)  My personal fav as always is to equip the Piranha X.

Q:  How should I spec Shield Boost?

A: Focus on immediate Shield Restore rather than Restore over time.

Let’s face it – you’re a Volus.  Any healing effect that is applied over seconds doesn’t do too much good for you, since your max health and shields are barely high enough to survive one and a half seconds of Assault Trooper fire.  This applies now to your teammates as well, now that shieldgate has been removed for both enemies AND players.  So, you want to focus on the initial Shield Restore.

If you spec Shield Boost for recharge speed and initial shield restore and spec Volus Training at Rank 5 to increase Shield Boost by 30%, you can restore over 900 points of shield to yourself and nearby teammates.  Add the orbs, and you can do that every second.  This is especially handy during escort or hack objectives.

A:  Because you’re spamming Shield Boost and you don’t need it.

Stasis is great if you’re fighting lower level enemies, but with the new charging Dragoons and the grenade spamming Geth Bombers, it’s become less useful.  Besides, now that you’re restoring your shields every second, you can take the time to shoot a moving target!

Q:  What’s more important, Proximity Mine or Recon Mine?

A:  They both essentially do the same thing – boost damage against enemies and explode.  Use them together!

Here’s why – alone, the PM gives you a 20% damage to enemy bonus and the RM gives you 25%.  Together, they give you a 45% bonus to damage to enemies.  This includes both weapon damage AND power damage, so the damage from the mines themselves also get a bonus.  Basically, the best way to use these combos is to fire a RM into a chokepoint, fire a PM at enemies already in the RM radius so that the bonuses stack, then shoot.

You don’t need to worry about recharge speed on the RM, assuming you use it for the weapon damage bonus rather than the explosion damage.  You shouldn’t need to blow up the RM unless enemies are threatening to overrun you, then you can use the RM to stagger enemies.  Yes, the RM does a lot of damage in one blast, but the added bonus you get from weapon damage for having the RM active  in terms of DPS is higher than blowing up the RM all the time.

Q:  How should I spec Shield Boost?

A:  Focus on initial shield restore, just like the Adept Volus.

With Shield Boost at Rank 5 and Volus Training at Rank 5 spec’d for initial shield restore and recharge speed, you should have 884 shields restored with the initial boost, more than enough to restore all of your shields.  The recharge speed will be around 3 seconds.

That’s it for the new Volus characters – let me know your thoughts in the comments!