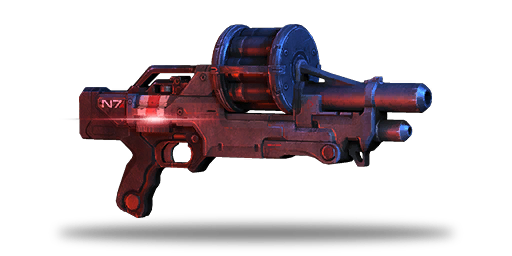 Everyone always wants to know what is the best weapon in ME3 Online Multiplayer for beating Platinum … A lot of people would say it depends on your gameplay style, but I say there are some clear winners in each category.

Here is my analysis of the FACTS, assuming you plan on relying on weapons rather than powers (raw data here):

The most important factor on Platinum is Damage Per Second (DPS).  This is because so many enemies swarm at once, you’ll need to take them down rapidly in order to not get overrun.

If you look at the DPS for each weapon at Level X (accounting for Reload Cancel – see my previous post here), the best weapons are:

As you can see, the Piranha is a clear leader, followed not-so-closely by the Cerberus Harrier.  Notice that I did not put the Typhoon on the list – that’s because its DPS is variable from 300-900 points, so even at average, it doesn’t make it to the top 10.  The top 10 are dominated by Shotguns and Assault Rifles, with only one Sniper Rifle, Pistol, and SMG each on the list.

Some people prefer sniping – while I don’t think sniping is an effective strategy on Platinum in general, if I were to do it, I would be concerned with Single Shot Kills (SSK).  For that, you have to look at Headshot Bonus and Damage.  The Headshot Bonus is a 2.5 multiplier on your regular one shot damage:

*Though the Geth Plasma Shotgun and Krysae Sniper Rifle do some of the highest one-shot damage, they do NOT have Headshot Bonuses, so they didn’t make the top 10.

**I would rank the Acolyte higher than the numbers actually dictate because of the 5x multiplier on Shields/Barriers.  This, in addition to it being an extremely lightweight gun, makes it pretty powerful.  The Acolyte can actually take out shields with one to two hits on:

The Javelin and Widow do the most damage for a single shot – they can SSK husks, cannibals, guardians, geth troopers, and assault troopers.  However, you do also want to take into account reload time and rate of fire, so let’s factor in DPS as well.  Of the top 10 SSK weapons, the Crusader, Valiant, Paladin, Saber, and Javelin top the list (note that neither the Widow nor Black Widow made it).

It’s hard to say which is the best Sniper Rifle – I guess it all depends on how good your aim is.  Assuming you can always headshot when you want to and you rarely miss, then the Javelin is far and away the best Sniper Rifle with huge one-shot damage and high DPS.  Assuming you don’t have as good aim, the Valiant is a great rifle with high DPS and decent one-shot damage.

I’d like to end this post with a caveat – gameplay is often different from what the numbers actually say … sometimes you just like how a certain type of gun “handles” or certain classes are better with certain guns (ie. Geth with Geth weapons), so take what I’ve written with a grain of salt and use whatever gun you “like” best :)

What do you think is the best weapon in the game?  Let me know in the comments!