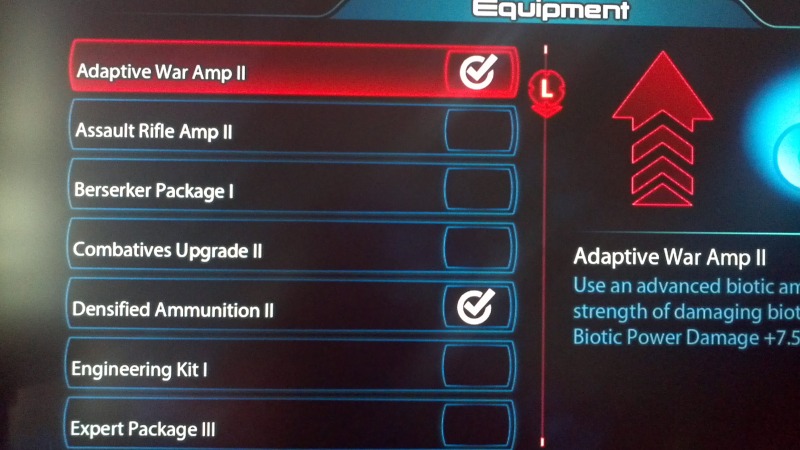 [UPDATED 11 SEPT] – Included a video just to help you visualize what needs to be done:

[UPDATED 2 SEPT] – Thanks to JimBob for posting an even more reliable way to Gear Glitch – see red text below!

For those of you curious about the Gear Glitch, let me enlighten you:

You can supposedly equip two Gears or other Equipment of the same category at the same time, at the sacrifice of another category (see photo). Typically, you can equip four things total, one of each category (1 x Ammo Bonus, Weapon Bonus, Armor Bonus, Gear).  With the Gear Glitch, you can still only equip four things total, but you can stack a category (ie. 2 x Gear, 1 x Ammo Bonus, 1 x Weapon Bonus).*

While people report this working, it did NOT work for me.  Maybe I was doing it wrong?

Method 2 – Spam down the list of Gear/Equipment, pressing A rapidly.  At some point, two boxes will be checked.  It is difficult to control which ones, but eventually you’ll get to a combination that you like.

This worked, but it took several tries before I could get a useful combination.

Method 3 – Select your desired Gear/Equipment.  Switch back and forth between that and an adjacent piece of equipment (above or below your selected choice), pressing A rapidly.  Eventually, both will be checked.

This also worked, but I preferred it on the Ammo/Weapon slot over the Gear slot because it’s hard to find adjacent Gear that work well together.  I got Armor Piercing Ammo III and IV at the same time and simply DESTROYED with my Harrier!

Method 4 [from JimBob] – Switch from one Gear to another pressing A quickly as you go between them (doesn’t have to be rapid, just quick enough that they are highlighted).  When you click on one gear and neither gear is selected, that means you’re about to be in the glitch – whichever Gear you last saw a checkmark next to is actually already selected, even though it’s not showing the checkmark.  Now, take your time and select any Gear you want – the next one you pick will be your second Gear and when you click it, you should see a checkmark appear next to that AND the first gear.

This is actually the most reliable method I’ve tried and let’s you take your time with your Gear choices!

If you exit the lobby and start a new one, you will still be in the glitch.  Likewise, you can start a lobby with your friends, let them get in the glitch, leave, then come back and get in the glitch yourself.  That way, all four players in a game can use it.

*When I first did this, I thought it might be a visual artifact, but I managed to get the Warfighter Package and Grenade Capacity Gear equipped at the same time, and the grenade numbers DID stack.

Did you find this useful?  Let me know in the comments!