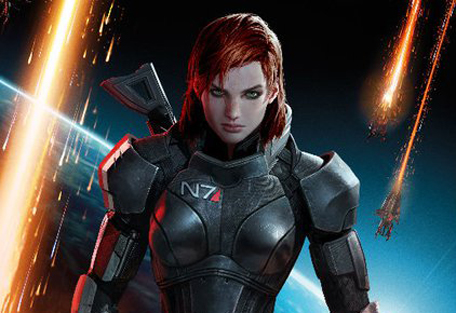 The short answer is yes.  That being said, I’ve only encountered two other girls besides myself through random matches and I have been playing for months.  I always wonder why that is, considering the numbers.

If you think about it, only 18% of ME3 players play the Campaign mode as female Shepard.  The game sold around 3.5 million worldwide, so that leaves about 630K female Shepards around the world.  Assuming that a small percentage of men choose to play as FemShep, let’s say there are roughly half a million girls playing ME3 in Campaign Mode.  With almost 60% of Xbox owners having Xbox Live accounts, let’s say that about 300k girls playing ME3 in Campaign Mode can also play Online Multiplayer.  Even if you discount that number 90% for all the girls who don’t play online or who aren’t identifiable as girls by their gamertags or voices, you still are left with 30,000 girls who should be playing Mass Effect 3 Online Multiplayer.  That’s only, oh, 10,000 times the number I’ve encountered!

So where are all the girls at???

Although the Mass Effect series is a very female-friendly series in my opinion, most girls who play will only play the Campaign mode.  There’s not much of a story to the Multiplayer mode and I think that might turn some girls off.  I mean, seriously, romancing a character is half the fun of the storyline!

I personally enjoy ME3 Multiplayer over Halo or Call of Duty because of the cooperative aspect of the online game.  I think more girls would play if they knew how great the ME3 online community was.  It’s not just a bunch of dumb jocks calling each other “fags” as they teabag each other’s dead bodies!

So, if you’re reading this and you want to play with a girl sometime  just to switch it up, let me know – I’m always down for a match!

Do you know girls who play ME3 Online Multiplayer?  Let me know in the comments or email me!