Well, I’m working on my writing, so here’s another Shenko fic since their romance captivates my imagination so much.  It’s just a one-page vignette where Kaidan finds Shepard’s body after the battle of London.  Dead or alive, you ask?  You’ll just have to read and find out. :) 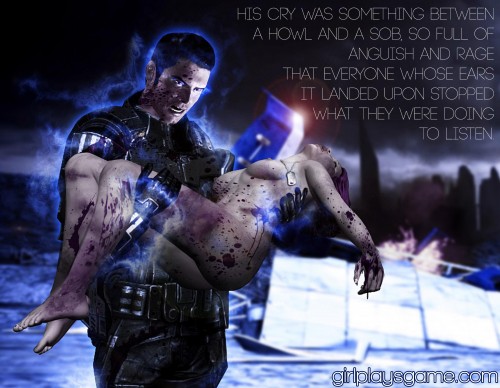 Kaidan lifted another piece of rubble, his head pounding from the exertion.  He’d been using his biotic lift ability for hours without pause and his migraine was becoming debilitatingly painful.  But he couldn’t stop – not when Shepard was out there somewhere.  In the time Kaidan had been searching, he’d found countless bodies and even saved a few lives, but he didn’t care.  He’d trade all their lives for Shepard’s.

The faint glimmer of blood caught Kaidan’s eye as he lifted the last of the debris.  He followed the trail to a body in charred armor lying among the battlefield refuse.  Only the chestplate remained mostly intact, the rest of the armor having disintegrated somewhere along the way.  But, it was enough for Kaidan to know the body belonged to a woman.  Then, he saw the set of bloodstained N7 dogtags hanging loosely from the woman’s neck and he knew.

He reached for the woman and turned her over gingerly; his stomach heaved as he laid eyes upon Shepard’s wasted face and ravaged body.  Not a single inch of her had made it back unscathed.  Her body was a painting of burns and lacerations.  Her singed hair was blanketed in ashy dust and the parts of her skin that weren’t red from blood were chalky and white.  Kaidan had been on enough to battlefields to recognize what the pallor of Shepard’s skin and the blueness around her lips meant.

Kaidan tried to resuscitate Shepard, though he knew his efforts were in vain as soon as he touched her soft, icy lips with his.  As he bent over her, he hated how vulnerable and small she looked, half-naked and as broken as the ruins surrounding her.

Shepard felt light in his arms as he scooped her up, the last remains of her crispy armor falling away at his touch.  Her head lolled lifelessly as Kaidan pulled her close to his chest, unable to feel her at all through his thick battle armor.  His heart felt like it was rusting away as a parade of doubts ran through his mind.

Kaidan unleashed a primal, heart wrenching scream as he clutched Shepard’s limp body in his arms.  His cry was something between a howl and a sob, so full of anguish and rage that everyone whose ears it landed upon stopped what they were doing to listen.

He sank to his knees, the weightless feeling of Shepard in his arms suddenly crushing him.  By the time the Normandy showed up to retrieve Shepard’s body, Kaidan had exhausted all his tears.  He kissed Shepard on her parted lips one last time before he let them carry her away, his eyes lingering on her face as she disappeared into the spacecraft.

“We’ll bring her back,” Miranda reassured him as she gently pulled him to his feet.  “We did it before and we can do it again.”

Kaidan nodded, clinging to that one desperate hope.  He couldn’t live without Shepard, not again.

Please let your comments below, I’d really appreciate any feedback you have!  Also, please read my other Shenko fic where Shepard lives after destroying the Reapers!