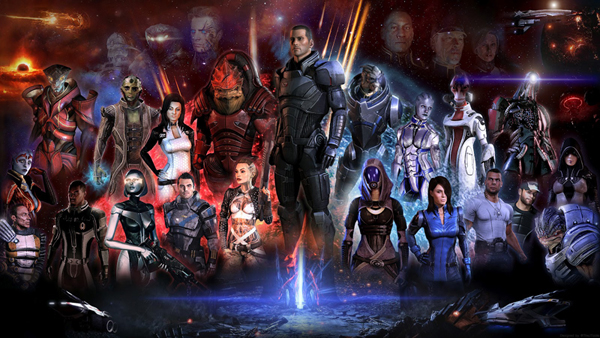 Hey guys – so according to Examiner.com, Casey Hudson (exec producer of the ME franchise) wants fan feedback on what we want from the next Mass Effect game!  In particular, he wants to know if it should take place before or after the main game’s events.

Casey Hudson also mentioned the possibility of game spin-offs, like a game featuring Garrus Vakarian.  While he is one of my favorite characters, I feel like the whole point of Mass Effect is the level of personalization and actually feeling that you ARE Commander Shepard.  Having spent so much time getting to know Garrus already, I feel like it would be difficult to play as yourself and not him.

Anyway, here’s what I want from Mass Effect 4:

1.  Timeline after the events of Mass Effect 3

Yes, I know ME4 won’t feature Shepard 2.0 nor would I want it to, but I want to see the ripple effect of my Shep’s existence on the new main character’s environment.  It would be interesting if the events took place several hundred/thousand years after ME3, just so you can start to see the repercussions of Shepard’s actions.  I want to have the choices Shepard made in the first three games (like Destroy/Synthesis/Control, curing the Genophage, saving the Rachni, etc.) have an impact on the environment in the fourth game.  At the same time, I want the ME4 characters and plot to be completely new and independent of the old characters and plot.  I guess what I’m trying to say is that I want ME1-3 to have impact on ME4 at a macro level but ME4 to be completely different on a micro level.

2.  Character option to play as an alien

Maybe I’m weird but I prefer to play video games as a human – in games like Skyrim, WoW, etc. I am always the boring human.  But, I would like people to have the option of playing as an alien … it just seems right given how much time you spent in ME1-ME3 cultivating human-alien relations.

This one is probably pretty obvious.  Of course I want to see new planets and systems.  But, I want some cameos from places we’ve grown to know and love in ME1-ME3.  The evolution of those familiar places after the events of ME3 would be interesting to see.  Has Thessia been rebuilt?  Is Tuchanka overpopulated with generations of Wrex and Bakara’s progeny?  Has Omega become a thriving center for legitimate business dealings?  Have the Quarians finally ditched those suits on Rannoch?  Will my new character quip, “I’ve had enough of this place” after visiting Horizon?

This is also fairly obvious.  While I love the asari, turians, etc., I want to see a less sexy species take a greater role in ME4.  I mean, how about the first Volus Spectre?  I also want to see some brand-new species that we haven’t even heard of yet.  Maybe like asari, but all hunky purple males instead of voluptuous blue females (am I right ladeeeez).  No, but really, let’s get some new alien action going on.

I love the Mass Effect team because they listened to their fans’ demands and released multiple DLCs that paid homage to the things we care about (Citadel DLC, anyone?).  I’d like to see that fanservice continue into ME4.

And just for kicks, this is my personal fanservice dream:  I want to see the Citadel rebuilt with a Shepard war memorial right next to the statue of the Krogan.  Depending on how ME3 ended, I want a brief epilogue for Shep – if I got the best ending where I chose Destroy and my Shep took a breath at the end of the game, I want it confirmed that s/he lived and was reunited with the Normandy crew.  Yes, I want my happily ever after, is that so wrong?

Anyway, that’s what I want.  I want a new storyline with new characters that still build upon the universe my Shepard explored and the decisions my Shepard made in the first three games.  I think the amazing, beautiful thing about the Mass Effect series is the impact your choices had on your whole game experience.  Something I chose to do in 2007 affected what happened to my Shepard five years later – that’s pretty powerful.  It’s like life, only better ‘cuz there are aliens.

Tweet him @CaseyDHudson and let him know how you feel.  You can link this blog post if you agree with what I wrote and add your own opinions in comments:  http://wp.me/p2EnkE-d6

What do you want out of Mass Effect 4?  Let me know in comments!